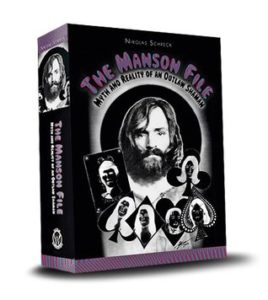 Author Nikolas Schreck (The Manson File) joins S.T. Patrick for the third time to discuss Charles Manson and the Tate-Labianca murders of August 1969. This year was the 50-year anniversary of the murders and Schreck hosted a sold-out talk in Los Angeles in August. In this episode, Patrick asks Schreck about the history of his communication with author Tom O’Neill, his perspective on O’Neill’s book Chaos (including its breakthroughs and faults), the media and Manson (50 years later), the wide-scale dissection of Vincent Bugliosi and the farce known as the Helter Skelter narrative, Schreck’s thoughts on Tarantino’s Once Upon a Time in Hollywood (and what Schreck believes was hidden within), and the continuous public interest in the case. Patrick and Schreck also fielded questions from The Education Forum about Bugliosi’s duping of Susan Atkins, whether Manson or anyone had been to the Cielo Drive house before or after the murders took place, the Patricia Krenwinkel-William Garretson rumor, Rudy Altobelli, Schreck’s thoughts on Nuel Emmons’s Manson In His Own Words, whether Manson ever discussed Reeve Whittson with Schreck, and much more. As usual, Schreck proves why he is one of the foremost experts on Manson the the Tate-Labianca murders. Schreck has been on the Midnight Writer News Show twice before, both times going over three information-packed hours. To hear those, check out episode 026 and episode 089. There is a good Facebook group for the upcoming, updated release of The Manson File. You can find it HERE. To purchase garrison.: The Journal of History & Deep Politics, go to http://www.lulu.com/spotlight/MidnightWriterNews.

Hello, everyone. We have been in the midst of a state-to-state move that has been nothing short of challenging. It's lasted longer than we'd … END_OF_DOCUMENT_TOKEN_TO_BE_REPLACED

This is the 2018 Midnight Writer News Show theme song. There will be new clips in the 2019 version. Stay tuned for more! Thank you for … END_OF_DOCUMENT_TOKEN_TO_BE_REPLACED

The JFK Historical Group will host its annual conference on April 5-7, 2019 in Olney, IL. at Olney Central College. Speakers, to date, include: … END_OF_DOCUMENT_TOKEN_TO_BE_REPLACED

Regarding the audio stopping at the 9:21 mark of MWN Episode 048 - RFK Must Die - The Assassination of Bobby Kennedy..... (NOTE: For those who … END_OF_DOCUMENT_TOKEN_TO_BE_REPLACED

The 2017 theme song from the Midnight Writer News Show is now available for download, as well as for your listening pleasure. The 2018 theme will … END_OF_DOCUMENT_TOKEN_TO_BE_REPLACED

In a recent interview, Henry Kissinger advised that the United States should not rush into defeating ISIS and similar groups since it could, … END_OF_DOCUMENT_TOKEN_TO_BE_REPLACED

When David Ray Griffin first released The New Pearl Harbor in 2004, it was the premiere book to ask, as its subtitle states, "disturbing … END_OF_DOCUMENT_TOKEN_TO_BE_REPLACED

Randy Benson's documentary The Searchers (2017) is an excellent look at the early researchers and research associated with the John F. Kennedy … END_OF_DOCUMENT_TOKEN_TO_BE_REPLACED