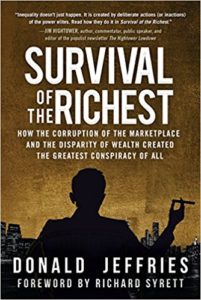 “A fresh look at economic inequality in America

Survival of the Richest scrutinizes how the collective wealth of America has been channeled from the poor and middle class into the hands of a few elitists.

American industry has been gutted, with wages and benefits stagnant or reduced, thanks to a disastrous trade deals, outsourcing, and the crippling of unions. The Occupy Wall Street movement, and the presidential campaigns of both Bernie Sanders and Donald Trump, reveals how more and more people who are struggling understand that the system is rigged against them.

While Americans have been trained to direct their scorn at welfare recipients and the poor in general, a tiny handful of plutocratic elites have profited on an unfathomable scale through corporate welfare and other perks. Unimaginable salaries and bonuses for the One Percent, contrasted by layoffs and reduced pay for the majority of the workforce, along with increasing calls for austerity measures and lowered standards of living, has become the “new normal” in America.

Donald Jeffries argues that this record economic inequality is more than an unintended consequence of globalism. In Survival of the Richest, he shows how the consolidation of wealth may well prove to be the greatest conspiracy of all.”

S.T. Patrick’s Amazon.com review of Survival of the Richest……

In “Survival of the Richest,” Donald Jeffries has written an indictment of the structural inequity that exists between the rich and the poor. As we move into the 21st century, that gap is widening, with no end in sight. This book is not an essay, however. Jeffries uses facts and mainstream studies to defend his arguments, as well as using a style of thought process that takes the reader back to the square one “why” questions we should all be asking. We spend so much time jealously bashing those who take dollars from the state as we relentlessly defend those who have bilked millions and billions from legislation and policies bought and paid for by and for their own interests. Jeffries intelligently questions the psychological as well as the practical. His book is a tour de force in common economic thought. Lest one think Jeffires is a conservative-bashing liberal, however, he is not. He is a fair-minded populist who looks for solutions as he pinpoints the problems that have infested the daily lives of Americans. Jeffries writes for me, and he writes for you. Survival of the Richest is one of the best “Hey! Lets re-think this!” works on the market. It’s one of the few books today that truly affects everyone, and it should be in every library from sea to shining sea.

Hello, everyone. We have been in the midst of a state-to-state move that has been nothing short of challenging. It's lasted longer than we'd … END_OF_DOCUMENT_TOKEN_TO_BE_REPLACED

This is the 2018 Midnight Writer News Show theme song. There will be new clips in the 2019 version. Stay tuned for more! Thank you for … END_OF_DOCUMENT_TOKEN_TO_BE_REPLACED

The JFK Historical Group will host its annual conference on April 5-7, 2019 in Olney, IL. at Olney Central College. Speakers, to date, include: … END_OF_DOCUMENT_TOKEN_TO_BE_REPLACED

Regarding the audio stopping at the 9:21 mark of MWN Episode 048 - RFK Must Die - The Assassination of Bobby Kennedy..... (NOTE: For those who … END_OF_DOCUMENT_TOKEN_TO_BE_REPLACED

The 2017 theme song from the Midnight Writer News Show is now available for download, as well as for your listening pleasure. The 2018 theme will … END_OF_DOCUMENT_TOKEN_TO_BE_REPLACED

In a recent interview, Henry Kissinger advised that the United States should not rush into defeating ISIS and similar groups since it could, … END_OF_DOCUMENT_TOKEN_TO_BE_REPLACED

When David Ray Griffin first released The New Pearl Harbor in 2004, it was the premiere book to ask, as its subtitle states, "disturbing … END_OF_DOCUMENT_TOKEN_TO_BE_REPLACED

Randy Benson's documentary The Searchers (2017) is an excellent look at the early researchers and research associated with the John F. Kennedy … END_OF_DOCUMENT_TOKEN_TO_BE_REPLACED