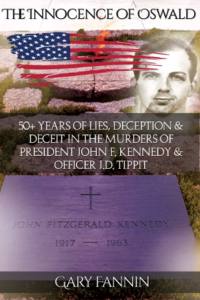 The Innocence of Oswald (2018) begins with President John F. Kennedy standing at the eastern portico of the United States Capitol on January 20, 1961. This is the moment when the second son of Joe and Rose Kennedy had hit the apex of his political career. As he addressed the nation, however, he asked not what could be done for him, he asked not what could be done for Americans. He asked every American to engage in a bit of soul searching designed to discover what each member of the citizenry can do for their country. This was Kennedy’s inauguration – sadly, his one and only inauguration.

One thousand days later, President Kennedy fell victim to the bullets of assassins. A coup d’etat had befallen America, and Lyndon B. Johnson was its new president.

We all hope that our best words can be seeds. There are many who took Kennedy’s words seriously in 1961. Others found their calling with the violent loss of their president. Randy Benson’s brilliant documentary The Searchers detailed those who found their calling simultaneously with America’s tragedy. John Barbour’s The American Media and the 2nd Assassination of President John Kennedy bitingly detailed the most egregious cases of manipulation by the mainstream media regarding the cover-up of the Kennedy assassination conspiracy, Researcher and author Gary Fannin worked with Barbour on the 2016 documentary. He has now produced, directed, and co-written his own documentary on the case. Fannin’s documentary project was based, in part, on his 2015 book The Innocence of Oswald: 50+ Years of Lies, Deception, & Deceit in the Murders of President John F. Kennedy & Officer J.D. Tippit.

The Innocence of Oswald is co-written by its narrator Tim Brennan, who exhibits the same tone and cadence of former NBC Meet the Press host Tim Russert. The former NBC host had a folksy intelligence that made him unique among D.C.’s elite presenters. Brennan does the same for a documentary that is so layered with angles, witnesses, histories, and potential theories that a newcomer could get lost. This is not to say that the film is confusing. Everyone who has ever taught, written about, studied or presented work on the case knows that this case is complex by nature.

Fannin nicely uses archival film footage along with newly produced interviews to wrap a story around the events. Many of the more emotional debates are touched on in Fannin’s film. He covers the president’s wounds, the South Knoll shooter theory, the Miami plot, Joseph Milteer, Richard Case Nagell, the Clint Murchison party of 11-21-63, Mauser vs Carcano, Oswald’s location in the TSBD, the Mac Wallace fingerprints, the motives of Jack Ruby, and much more.

The most effective segment of the documentary comes when Fannin tells the story of Ricky White and his father Roscoe. In 1982, son Ricky found a cache of items that convinced him that his father had been involved in the assassination. Since then, the Whites have worked exclusively with researcher Gary Shaw. Fannin believes it is very likely that White was the infamous “Badge Man” who fired from the grassy knoll. Fannin isn’t alone; at the last JFK assassination conference that he attended, Jim Marrs stated that he also believed White fired from the knoll. In a documentary that hits many plot points, this is the most compelling.

I often think that research communities over-lionize “witnesses” to an event. Quite often, the researchers are the voices who can best synthesize and present information. This is the case in The Innocence of Oswald, as well. Marshal Evans, Ed Tatro, Robert Groden, Barr McClellan, Dick Russell, and Chris Gallop are more compelling than the archival footage of the witnesses. Researchers tend to be natural storytellers. The above prove that. Their contributions to the project are strong.

Fannin is someone for whom this case has given an answer to Kennedy’s inaugural “ask.” He is a full-time researcher who enjoys making contact with professionals and hobbyists alike. He is as amiable as anyone in the community, and he is dedicated to sharing that information in search of the truth. This case is important to Fannin, and it remains a focus of his life.

Kennedy once said that the “word ‘secrecy’ is repugnant in a free and open society.” To allow freedom, we should support those who try to keep information public.

The Innocence of Oswald, the book and the film, are efforts that should be in your collection.

Hello, everyone. We have been in the midst of a state-to-state move that has been nothing short of challenging. It's lasted longer than we'd … END_OF_DOCUMENT_TOKEN_TO_BE_REPLACED

This is the 2018 Midnight Writer News Show theme song. There will be new clips in the 2019 version. Stay tuned for more! Thank you for … END_OF_DOCUMENT_TOKEN_TO_BE_REPLACED

The JFK Historical Group will host its annual conference on April 5-7, 2019 in Olney, IL. at Olney Central College. Speakers, to date, include: … END_OF_DOCUMENT_TOKEN_TO_BE_REPLACED

Regarding the audio stopping at the 9:21 mark of MWN Episode 048 - RFK Must Die - The Assassination of Bobby Kennedy..... (NOTE: For those who … END_OF_DOCUMENT_TOKEN_TO_BE_REPLACED

The 2017 theme song from the Midnight Writer News Show is now available for download, as well as for your listening pleasure. The 2018 theme will … END_OF_DOCUMENT_TOKEN_TO_BE_REPLACED

In a recent interview, Henry Kissinger advised that the United States should not rush into defeating ISIS and similar groups since it could, … END_OF_DOCUMENT_TOKEN_TO_BE_REPLACED

When David Ray Griffin first released The New Pearl Harbor in 2004, it was the premiere book to ask, as its subtitle states, "disturbing … END_OF_DOCUMENT_TOKEN_TO_BE_REPLACED

Randy Benson's documentary The Searchers (2017) is an excellent look at the early researchers and research associated with the John F. Kennedy … END_OF_DOCUMENT_TOKEN_TO_BE_REPLACED