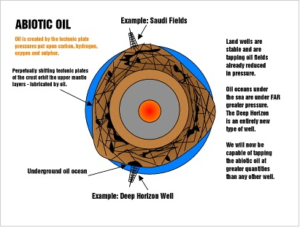 “The suggestion that petroleum might have arisen from some transformation of squashed fish or biological detritus is surely the silliest notion to have been entertained by substantial numbers of persons over an extended period of time.” Fred Hoyle, 1982 (English astronomer noted primarily for his contribution to the theory of stellar nucleosynthesis)

“The capital fact to note is that petroleum was born in the depths of the Earth, and it is only there that we must seek its origin.” (D. Mendeleev, 1877){{ref|Mendeleev}}Mendeleev, D., 1877. L’Origine du pétrole. Revue Scientifique, second series, VIII, p. 409–416. Dmitri Mendeleev (credited with the creation of the original Periodic Table of Elements) from his tract entitled THE ORIGIN OF PETROLEUM

Sitting to write this piece I was faced with a choice. Do I give a detailed yet concise explanation of what I have come to believe is the hoax that is “fossil fuel” or do I keep it simple and give you Abiogenic Oil Lite? The choice was easy. I’m not a physicist, geologist, chemist or  for that matter even a scientist – of any discipline. Besides, in this instance “detailed yet concise” is not an option – even for a physicist, geologist or chemist. To “prove” what I am suggesting here would require hundreds of thousands of words and countless equations.

Instead I give you the short and snappy version from which to draw your own conclusions. For me there is only one…and it’s not this one.

Petroleum and natural gas are formed by the anaerobic decomposition of remains of organisms including phytoplankton and zooplankton that settled to the sea (or lake) bottom in large quantities under anoxic conditions millions of years ago. Over geological time this organic matter, mixed with mud, got buried under heavy layers of sediment. The resulting high levels of heat and pressure caused the organic matter to chemically alter, first into a waxy material known as  kerogen which is found in oil shales, and then with more heat into liquid and gaseous hydrocarbons in a process known as catagenesis. Despite these heat driven transformations (which may increase the energy density compared to typical organic matter), the embedded energy is still photosynthetic in origin.

Note the absence of the word “theory”. The above description is presented as fact, beyond question or discussion. This is no coincidence but nor is it likely it is intentional on the part of the author. The sad fact is that human beings are incredibly gullible and easily manipulated. Very few people question anything, let alone anything as heady as the origin of oil. It has probably never occurred to the writer that what they are referring to is mere theory just as it never occurs to most folk that “reputable” news agencies are only reputable because nobody questions them. 9/11 sorted that little anomaly out for me.

Unless someone lived long enough to observe the above process it is, like most things we take for granted (yes, including the “laws” of physics) a supposition. So, here for your consideration, is another “theory”

Russian geologist Nikolai Alexandrovitch Kudryavtsev was the first to propose the modern abiotic theory of petroleum in 1951. He analyzed the geology of the Athabasca Tar Sands in Alberta, Canada and concluded that no “source rocks” could form the enormous volume of hydrocarbons (estimated today 1.7 trillion barrels), and that therefore the most plausible explanation is abiotic deep petroleum. This petroleum is thought to be a product of the natural geological mechanisms at work deep within the earth…much deeper than the more traditionally exploited wells common for the last 100 years.

Although this theory is largely supported by geologists in Russia and Ukraine it has recently begun to receive attention in the West, where the biogenic petroleum theory is accepted by the vast majority of petroleum geologists. Kudryavtsev’s work was continued by many Russian researchers — Petr N. Kropotkin, Vladimir B. Porfiriev, Emmanuil B. Chekaliuk, Vladilen A. Krayushkin, Georgi E. Boyko, Georgi I. Voitov, Grygori N. Dolenko, Iona V. Greenberg, Nikolai S. Beskrovny, Victor F. Linetsky and many others.

Astrophysicist Thomas Gold was one of the abiogenic theory’s most prominent proponents in recent years in the West, until his death in 2004. Dr. Jack Kenney of Gas Resources Corporation is perhaps the foremost proponent in the West. The theory receives continued attention in the media as well as in scientific journals.

In 1892 the Geneva Congress on Organic Nomenclature codified organic substances, ostensibly for commercial purposes, John D. Rockefeller made sure oil was included as an organic substance. He did this by placing his own pet scientists who successfully argued that oil was organic, and thus finite. This is described by none other than mister x himself, Leroy Fletcher Prouty in a widely available YouTube video where he discusses this and his own experiences whilst working in the railroad industry. (1)

From this obscure meeting the notion that Oil is a finite, precious resource became an accepted fact. Half a century later as the US decided to isolate the USSR as a boogie man Stalin tasked his geologists to scour the USSR for oil resources in the knowledge that he needed to be self sufficient. The diligent Russians decided to first establish what it was they were looking for before beginning their search. They concluded that oil is a product of continuing mechanisms within the earth’s mantle. The ramifications of this are enormous. Although strictly not limitless, the abiotic theory suggests that oil is immeasurably more abundant than the biogenic hypothesis dictates.

Is there any proof of the abiotic theory?

Short answer – yes. The Gulf of Mexico is where deep drilling is revealing enormous reserves, a fact highlighted by the recent BP oil spill. That spill was worsened by the enormous pressures the oil was under..pressures the biogenic theory says oil cannot exist at without becoming a gas.

“No one has been more astonished by the potential implications of our work than myself,” said analytic chemist Jean Whelan, at the Woods Hole Oceanographic Institution, in Massachusetts. “There already appears to be a large body of evidence consistent with … oil and gas generation and migration on very short time scales in many areas globally,” she wrote in the journal Sea Technology.   ”Almost equally surprising,” she added, is that “there seem to be no compelling arguments refuting the existence of these rapid, dynamic migration processes.“   The first sketchy evidence of this emerged in 1984, when Kennicutt and colleagues from Texas A&M University were in the Gulf of Mexico trying to understand a phenomenon called “seeps,” areas on the seafloor where sometimes large amounts of oil and gas escape through natural fissures.   ”Our first discovery was with trawls. We knew it was an area of massive seepage, and we expected that the oil seeps would poison everything around” the site. But they found just the opposite.   ”On the first trawl, we brought up over two tons of stuff. We had a tough time getting the nets back on board because they were so full” of very odd-looking sea.floor creatures, Kennicutt said. “They were long straw like things that turned out to be tubeworms.   ”The clams were the first thing I noticed,” he added. “They were pretty big, like the size of your hand, and it was obvious they had red blood inside, which is unusual. And these long tubes — 3, 4 and 5 feet long — we didn’t know what they were, but they started bleeding red fluid, too. We didn’t know what to make of it.”   The biologists they consulted did know what to make of it. “The experts immediately recognized them as chemo-synthetic communities,” creatures that get their energy from hydrocarbons — oil and gas — rather than from ordinary foods. So these animals are very much like, but still different from, recently discovered creatures living near very hot seafloor vent sites in the Pacific, Atlantic and other oceans.

This is how the scientific community deals with the total repudiation of everything they espouse. Instead of following their findings to their ultimate and, some would argue, inevitable conclusion, they speak of them in isolation. What they do not mention…so I will, is that the existence of creatures that get their energy from hydrocarbons means there is an alternative explanation for the presence of organic elements within “fossil fuels” other than fossils!!!

What is more, the existence of oil seepage on the seafloor means that oil seepage is possible everywhere…including and obviously into (after having first formed) existing (shallow) oil fields!

Methane is a hydrocarbon. It is a byproduct of biological matter…either directly or geologically. In other words living matter is required. Methane exists on Saturn’s moon Titan, as well as and in the atmospheres of Jupiter, Saturn, Uranus and Neptune. Methane is the primary constituent of natural gas…a “fossil fuel”. Although the presence of methane in extraterrestrial environments does not of itself repudiate the biogenic theory, equally, it does validate the abiogenic theory…i.e. it shows that “squashed fish and other biological detritus” are not prerequisites for the existence of such substances. If they are not prerequisites then perhaps assuming they are was a hasty move. Insisting they are is purely a business move!!!

This is the biggest giveaway for me. According to a study by the university of Utah it would have taken a staggering 98 tons of prehistoric, buried plant material – that’s 196,000 pounds – to produce each gallon of gasoline we burn in our cars, SUVs, trucks and on and on. “Can you imagine loading 40 acres worth of wheat – stalks, roots and all – into the tank of your car or SUV every 20 miles?” asks ecologist Jeff Dukes. Fossil fuel apologists will argue that the timescales their theory proposes…millions of years, more than explains the obvious mathematical anomaly here. But crucially they don’t explain how. They talk of oil as a one off phenomenon, formed over geological timescales….not as a conveyor belt of living forests dying, sinking and being pressurised time after time. And their own calculations indicate that not only should oil be running scarce it should be a thing of the past. Instead we have newer, larger deposits being found almost weekly.

What does it all mean?

Sooner or later the myth of peak oil will be exposed by the continued abundance of oil reserves and their constant replenishment. But history proves that capitalism won’t be admitting anything anytime soon and all the resources money can buy will be expended keeping the lie going as long as possible.

Hello, everyone. We have been in the midst of a state-to-state move that has been nothing short of challenging. It's lasted longer than we'd … END_OF_DOCUMENT_TOKEN_TO_BE_REPLACED

This is the 2018 Midnight Writer News Show theme song. There will be new clips in the 2019 version. Stay tuned for more! Thank you for … END_OF_DOCUMENT_TOKEN_TO_BE_REPLACED

The JFK Historical Group will host its annual conference on April 5-7, 2019 in Olney, IL. at Olney Central College. Speakers, to date, include: … END_OF_DOCUMENT_TOKEN_TO_BE_REPLACED

Regarding the audio stopping at the 9:21 mark of MWN Episode 048 - RFK Must Die - The Assassination of Bobby Kennedy..... (NOTE: For those who … END_OF_DOCUMENT_TOKEN_TO_BE_REPLACED

The 2017 theme song from the Midnight Writer News Show is now available for download, as well as for your listening pleasure. The 2018 theme will … END_OF_DOCUMENT_TOKEN_TO_BE_REPLACED

In a recent interview, Henry Kissinger advised that the United States should not rush into defeating ISIS and similar groups since it could, … END_OF_DOCUMENT_TOKEN_TO_BE_REPLACED

When David Ray Griffin first released The New Pearl Harbor in 2004, it was the premiere book to ask, as its subtitle states, "disturbing … END_OF_DOCUMENT_TOKEN_TO_BE_REPLACED

Randy Benson's documentary The Searchers (2017) is an excellent look at the early researchers and research associated with the John F. Kennedy … END_OF_DOCUMENT_TOKEN_TO_BE_REPLACED