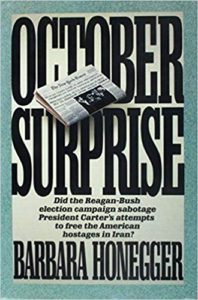 Barbara Honegger joins S.T. Patrick to discuss her book The October Surprise: Did the Reagan-Bush Election Campaign Sabotage President Carter’s Attempts to Free the American Hostages in Iran? Honegger discusses her work and associations within the 1980 Reagan-Bush campaign and her position at the White House from 1981-1983. Why is the October Surprise important today? Whom did she most admire in the Reagan White House? When did she first suspect a secret deal had been made? Was there a 53rd hostage? Why is the situation called the October Surprise? How and at what point were the Israelis brought into the arms transactions? Who was William Casey in 1980? What was the importance of Houshang Lavi? Did Carter believe he had a secret deal, himself, in October 1980? What happened at the seminal Paris meeting in October 1980? And so much more!

The October Surprise can be purchased at Amazon and at other fine booksellers.

Barbara Honegger has become one of the of the world’s leading experts on 9/11, and especially the situation at the Pentagon (‘Behind The Smoke Curtain: What Happened at the Pentagon on 911, and What Didn’t, and Why It Matters’) , but the thing that I first noticed was her 1989 book The October Surprise (1989). Barbara Honegger worked as a researcher at the Hoover Institution before joining the Ronald Reagan campaign as a researcher and policy analyst in 1980. Honegger headed Reagan’s gender discrimination agency review before resigning in August, 1983. While working for Reagan she discovered information that convinced her that George H.W. Bush and William Casey, Reagan’s first CIA director,  had conspired to make sure that Iran did not release the U.S. hostages until President Jimmy Carter had been defeated in the 1980 presidential election. Honegger took a lot of fire for this work. She was the first to release a book on the October Surprise. Over the years, much of her work has been confirmed by formerly classified documents and deathbed confessions of the then head of French Intelligence and one of the key CIA covert operators involved.

Barbara Honegger and Bonnie Faulkner, host of the ‘Guns and Butter’ Radio Show on the Pacifica Network, host a video walking tour of the official Sept. 11th Museum at Ground Zero that uses the actual exhibit items in the Museum itself to prove that the official 9/11 story is false.  It is currently available for viewing on YouTube.

Hello, everyone. We have been in the midst of a state-to-state move that has been nothing short of challenging. It's lasted longer than we'd … END_OF_DOCUMENT_TOKEN_TO_BE_REPLACED

This is the 2018 Midnight Writer News Show theme song. There will be new clips in the 2019 version. Stay tuned for more! Thank you for … END_OF_DOCUMENT_TOKEN_TO_BE_REPLACED

The JFK Historical Group will host its annual conference on April 5-7, 2019 in Olney, IL. at Olney Central College. Speakers, to date, include: … END_OF_DOCUMENT_TOKEN_TO_BE_REPLACED

Regarding the audio stopping at the 9:21 mark of MWN Episode 048 - RFK Must Die - The Assassination of Bobby Kennedy..... (NOTE: For those who … END_OF_DOCUMENT_TOKEN_TO_BE_REPLACED

The 2017 theme song from the Midnight Writer News Show is now available for download, as well as for your listening pleasure. The 2018 theme will … END_OF_DOCUMENT_TOKEN_TO_BE_REPLACED

In a recent interview, Henry Kissinger advised that the United States should not rush into defeating ISIS and similar groups since it could, … END_OF_DOCUMENT_TOKEN_TO_BE_REPLACED

When David Ray Griffin first released The New Pearl Harbor in 2004, it was the premiere book to ask, as its subtitle states, "disturbing … END_OF_DOCUMENT_TOKEN_TO_BE_REPLACED

Randy Benson's documentary The Searchers (2017) is an excellent look at the early researchers and research associated with the John F. Kennedy … END_OF_DOCUMENT_TOKEN_TO_BE_REPLACED