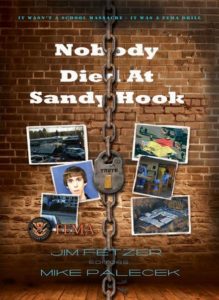 DR. JIM FETZER joined S.T. Patrick to discuss the issues surrounding the Amazon banning of Nobody Died at Sandy Hook. In the discussion, Fetzer addresses the details of the Sandy Hook case, including the reasons why he believes it was a false flag operation involving crisis actors and FEMA. Fetzer also addresses the issues of the Lanza family, Wolfgang Halbig’s quest, and issues he has with mainstream detractors. In discussing the alt.media, Fetzer discusses the reason why he was booted prematurely from “Ground Zero with Clyde Lewis,” why he was replaced on “Black Op Radio,” and why he may have seen his last guest spot on the “Jeff Rense Show.” Fetzer and Patrick also touch on the issues of the JFK assassination, 9/11, Parkland, Holocaust revisionism, Michelle Obama, and Fetzer’s entrance into the alternative community.

Jim Fetzer can be followed and read JamesFetzer.blogspot.com. S.T. accidentally said “Jim” instead of “James” when giving the address on the show. It is correct above. All the books banned or overpriced by Amazon.com can be found at Moon Rock Books, where you can purchase them in color or black-and-white, as well as requesting autographed copies. If you would like the classic works, Assassination Science, Murder in Dealey Plaza, or The Great Zapruder Film Hoax, they can still be found on Amazon. Though, since Amazon.com has made it difficult for Jim to sell his books, we suggest buying them anywhere else they can be found.

This is the 2018 Midnight Writer News Show theme song. There will be new clips in the 2019 version. Stay tuned for more! Thank you for … END_OF_DOCUMENT_TOKEN_TO_BE_REPLACED

The JFK Historical Group will host its annual conference on April 5-7, 2019 in Olney, IL. at Olney Central College. Speakers, to date, include: … END_OF_DOCUMENT_TOKEN_TO_BE_REPLACED

Regarding the audio stopping at the 9:21 mark of MWN Episode 048 - RFK Must Die - The Assassination of Bobby Kennedy..... (NOTE: For those who … END_OF_DOCUMENT_TOKEN_TO_BE_REPLACED

The 2017 theme song from the Midnight Writer News Show is now available for download, as well as for your listening pleasure. The 2018 theme will … END_OF_DOCUMENT_TOKEN_TO_BE_REPLACED

In a recent interview, Henry Kissinger advised that the United States should not rush into defeating ISIS and similar groups since it could, … END_OF_DOCUMENT_TOKEN_TO_BE_REPLACED

When David Ray Griffin first released The New Pearl Harbor in 2004, it was the premiere book to ask, as its subtitle states, "disturbing … END_OF_DOCUMENT_TOKEN_TO_BE_REPLACED

Randy Benson's documentary The Searchers (2017) is an excellent look at the early researchers and research associated with the John F. Kennedy … END_OF_DOCUMENT_TOKEN_TO_BE_REPLACED