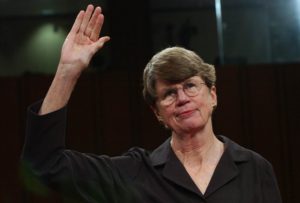 Janet Reno (1938-2016), the first woman to serve as Attorney General (1993-2001), died this month. She was diagnosed with Parkinson’s disease in 1995, two years after she authorized the April 19, 1993 siege at Mt. Carmel, the Branch Davidian property in Waco, Texas, and the same year she prosecuted Timothy McVeigh and Terry Nichols as the sole conspirators of the Murrah Federal Building bombing in Oklahoma City.

Prepping for Disaster: Janet Reno and the Waco Murders

The plan for the raid on what the mainstream media strategically called a “compound” worked its way up the chain of command to Reno on April 12, 1993. It was a two-step plan that the FBI and ATF hoped would end at step one – injecting tear gas into two areas of the building. They had hoped that this would drive the men, women, and children out and the siege would be short-lived. Part two of the plan to lay siege to Mt. Carmel involved tearing down the outer walls to expose those inside.

Reno was not alone in her decisions. She was often consulted not only by the commanders in the field, but also by FBI director William Sessions and Assistant Attorney General Webster Hubbell, a Clinton appointee tied to the same Arkansas scandals that would trail the president and first lady throughout their tenure in D.C.

Reno expressed reservations about the use of CS gas, but one Army research PhD told her that “although there had been no laboratory tests performed on children relative to the effects of the gas, anecdotal evidence was convincing that there would be no permanent injury.” The United States and more than one hundred nations had banned the use of CS gas in warfare. Reno, Sessions, Hubbell, and the commanders in the field must have felt, however, that it was appropriate to use CS gas on the men, women, and children living at Mt. Carmel.

Reno also suggested a scheme that would involve waiting until the water supply to Mt. Carmel was so depleted that the inhabitants would be thirsted out of their home. A later Justice Department report stated that the FBI convinced Reno that “(Branch Davidian leader David) Koresh was rationing water to ensure discipline.” Reno quickly abandoned the water strategy and instead asked for a written report on entrance strategies from the FBI.

The FBI’s report was read by the Attorney General on April 17. She quickly gave her approval to an assault plan that would begin on April 19. What was to be a 48-hour plan lasted approximately five minutes. “It was not law enforcement’s intent that this was to be D-Day,” the Justice Department’s report claimed.

At 6:02 a.m. M6OA1 tanks modified for demolition began tearing through the walls of Mt. Carmel. The tanks then began firing CS gas into the building. Shortly thereafter, protecting their home, the residents of Mt. Carmel fired shots at the armored CEVs (combat engineering vehicles). The operations plan, approved by Reno, called for an escalation of government action if the tanks were fired upon.

This seemed like a certainty. Unlike many Americans, there are those who believe in literally protecting property rights and the right to exist as a community. When they are threatened and fired upon by others – government or not – they will fire back. Self-defense laws protect individuals from other individual intrusions, but it is assumed that individuals are simply supposed to acquiesce when the intruder is a government entity over-aggressively enforcing its will. The Branch Davidians in Waco believed differently.

The Justice Department details Reno’s reaction as that of surprise. In defending Reno, allowing her a human reaction to the commanders’ over-aggressive actions, the report also made the Attorney General look incompetent. Reno “did not read the prepared statement carefully,” the report said. “Nor did she read the supporting documentation. She read only a chronology.” Reno, then, approved fatal violence against American citizens after reading an outline and disregarding the actual plans.

Around 11:40 a.m., after a vapor had formed from the over 400 ferret rounds fired into the home, the building caught fire. Within a half hour, Mt. Carmel was destroyed and those inside had died.

Reno, President Bill Clinton, and FBI spokesmen all immediately began claiming that the Branch Davidians had started the fire. The ATF and the FBI made sure that no evidence could be investigated, just as Branch Davidian spokesman Steve Schneider said they would on March 10, over a month before the blaze. “If anybody wanted to come here and burn the place down, kill all the people, what evidence would be left?” Schneider asked.

Over the next month, Schneider made multiple statements predicting that the government agents would, indeed, burn Mt. Carmel to the ground in an effort to destroy evidence. Schneider was correct in his predictions, despite an FBI negotiator once telling him “No, we’re not going to do something like that,”

In a statement as callous as his wife’s later comment regarding Muammar al-Qaddafi (“We came, we saw, he died.”), President Bill Clinton summed up the entire horrific tragedy at Waco in one line: “Some religious fanatics murdered themselves.”

The Clinton Factor: Waco in the White House

On a February 2001 episode of Larry King Live, former White House aide Linda Tripp alleged that it was first lady Hillary Clinton that had pressured the late Vince Foster, Hillary’s partner at Rose Law Firm and Deputy White House Counsel for the Clinton Administration, to find a solution to the Waco standoff. According to author Robert Morrow, “Foster, at Mrs. Clinton’s direction, transmitted the order to move on the Branch Davidian’s Waco compound, which culminated in a military style attack on the wooden building.”

Mike McNulty, producer of the documentary Waco: Rules of Engagement, also believed it was Hillary Clinton who gave the orders from the White House. It should be pointed out that in 1993, and throughout the Clinton administration, Mrs. Clinton did not have an appointed or elected role in the administration. She had never been elected nor had she ever been confirmed by the Senate. She assumed power by proxy, the definition of a shadow government.

In an op-ed piece for the New York Times, former Clinton administration adviser Dick Morris wrote that it was the president, himself, who called the shots in Waco.

Reno, In the End.

Regardless of who gave the orders at the White House level – as it appears to be at least one of the “Two for the price of one” Clintons – Janet Reno is on record as having approved the tactics used against the Branch Davidians. She also approved the prosecution of McVeigh and Nichols as the only Oklahoma City conspirators, despite evidence that others, including a Middle Eastern man seen with McVeigh, were involved. Whether or not she made warm speeches for progressive groups after her tenure as Attorney General, she is still responsible for the over eighty deaths at Mt. Carmel, almost twenty of which were children. This is her legacy. This is her truth.

Hello, everyone. We have been in the midst of a state-to-state move that has been nothing short of challenging. It's lasted longer than we'd … END_OF_DOCUMENT_TOKEN_TO_BE_REPLACED

This is the 2018 Midnight Writer News Show theme song. There will be new clips in the 2019 version. Stay tuned for more! Thank you for … END_OF_DOCUMENT_TOKEN_TO_BE_REPLACED

The JFK Historical Group will host its annual conference on April 5-7, 2019 in Olney, IL. at Olney Central College. Speakers, to date, include: … END_OF_DOCUMENT_TOKEN_TO_BE_REPLACED

Regarding the audio stopping at the 9:21 mark of MWN Episode 048 - RFK Must Die - The Assassination of Bobby Kennedy..... (NOTE: For those who … END_OF_DOCUMENT_TOKEN_TO_BE_REPLACED

The 2017 theme song from the Midnight Writer News Show is now available for download, as well as for your listening pleasure. The 2018 theme will … END_OF_DOCUMENT_TOKEN_TO_BE_REPLACED

In a recent interview, Henry Kissinger advised that the United States should not rush into defeating ISIS and similar groups since it could, … END_OF_DOCUMENT_TOKEN_TO_BE_REPLACED

When David Ray Griffin first released The New Pearl Harbor in 2004, it was the premiere book to ask, as its subtitle states, "disturbing … END_OF_DOCUMENT_TOKEN_TO_BE_REPLACED

Randy Benson's documentary The Searchers (2017) is an excellent look at the early researchers and research associated with the John F. Kennedy … END_OF_DOCUMENT_TOKEN_TO_BE_REPLACED