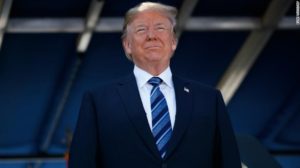 According to the Democrats, the November mid-terms are poised to bring a sea of blue that will sweep across the country and drown every Republican opponent in its path. In actuality, it appears their so-called “blue wave” is dwindling by the day. The Democrats have become intoxicated with wresting control from a president they see as a tyrant and a disgrace. Unfortunately for the Dems, come election time, the voters may not agree with them very much. So how is this happening? How is it possible that Democrats are losing voter support for their agenda? The answer can be traced to three main aspects of the Trump presidency.

First, the Democrat agenda has basically become the call for all-out socialism. This extreme position is not popular with enough left-leaning voters. There are definitely socialist policies that are popular among many Democrats and independents. Nevertheless, those ideas do have a stopping point. The latest proposals put forth by Bernie Sanders, Corey Booker, and Kamala Harris go to an extreme that makes a good deal of Democrat voters uncomfortable. The calls for universal healthcare, universal education, a guaranteed job, and a guaranteed income are positions that have only gained popularity among the most extreme faction of the left. A good deal of American voters still have enough lucidity to understand that these things are fiscally unsustainable. The costs associated with these programs would add high octane fuel to the nation’s already ticking debt bomb. At this point, enough voters understand the disastrous effects these policies would have on the nation, and they simply will not vote for them.

Second, the economy is beginning to fire on all cylinders after years of stagnation. Say what you will, but the phrase “It’s the economy stupid” became popular for a reason.  With unemployment levels across all spectrums seeing historical lows, real wages rising, and tax cuts keeping more disposable income in the pockets of ordinary Americans, voters are unlikely to upset the apple cart. On an almost universal level, the issue of the economy tends to be the top concern of Americans. Given recent economic developments, it may be it difficult to convince voters to return to the good ol’ days of 2% annual growth, better known as “the new norm”.

Third, say what you will about Trump’s unpolished style of politics, he has proven to be a man of his word on his campaign pledges. People are fed up with lying politicians who vow to represent the interests of the voters, only to continuously backtrack on every promise. Although he may lack credibility in some areas, it cannot be said that keeping his promised commitments is one of them. Trump pledged to put a conservative justice on the Supreme Court; he said he would approve the Keystone XL pipeline, he promised tax reform, he swore to roll back burdensome regulations, and he promised a friendlier business climate.  He also said he would relocate the U.S. embassy to Jerusalem, He promised to renegotiate our trade deals, vowed to pull out of the Paris Accords, and he promised to scrap the Iran nuclear agreement to the dismay of the left,

Trump has kept every one of those promises. Even the promises he has yet to fulfill, (i.e. building the border wall, bringing down prescription drug prices, and repealing Obama Care.)  He is preventing North Korea and Iran from developing nuclear weapons.  All are Trump’s commitments and currently works in progress. In an age when voters are fed up with politicians who say one thing and do another, Trump may seem like a breath of fresh, believable air.  That gives Trump political credibility and credibility cannot afford to be overlooked.

In spite of this, Democrats still stand a chance in the 2018 midterms. Given the historical record, Democrats have a 92% chance of gaining seats in November. With four Senate seats and thirty House seats up for grabs, Democrats need to gain two seats in the Senate and twenty-four seats in the House in order to regain control of Congress.  Therein lies the problem for the Dems. In the beginning of the mid-term season, Democrats were polling with a 12% advantage over Republicans on generic ballots. That lead has currently shrunk to a mere 4%. This is significant since 12% sets up for the highly touted “blue wave.” Unfortunately for the Dems, 4% only leaves them with a statistical chance of winning one seat in the Senate and sixteen seats in the House.  If these numbers hold true, it will mean the Republicans maintain control of Congress going into the 2020 presidential election, where the historical record gives the incumbent a 65% chance of being re-elected.

The Democrats have good reason to worry.  A president who’s creating jobs, putting money back in the hands of workers, and following through on campaign promises becomes nearly impossible to unseat. Trump’s rising approval ratings may signal a significant shift in the mood of the country. The Dems would be wise to pay close attention to the ominous signs on their horizon. Seeing the falling support and lack of enthusiasm among many left-leaning voters for the Democrats’ agenda, one might argue that Trump has, in fact, built the wall he promised to deliver back in 2016.

Hello, everyone. We have been in the midst of a state-to-state move that has been nothing short of challenging. It's lasted longer than we'd … END_OF_DOCUMENT_TOKEN_TO_BE_REPLACED

This is the 2018 Midnight Writer News Show theme song. There will be new clips in the 2019 version. Stay tuned for more! Thank you for … END_OF_DOCUMENT_TOKEN_TO_BE_REPLACED

The JFK Historical Group will host its annual conference on April 5-7, 2019 in Olney, IL. at Olney Central College. Speakers, to date, include: … END_OF_DOCUMENT_TOKEN_TO_BE_REPLACED

Regarding the audio stopping at the 9:21 mark of MWN Episode 048 - RFK Must Die - The Assassination of Bobby Kennedy..... (NOTE: For those who … END_OF_DOCUMENT_TOKEN_TO_BE_REPLACED

The 2017 theme song from the Midnight Writer News Show is now available for download, as well as for your listening pleasure. The 2018 theme will … END_OF_DOCUMENT_TOKEN_TO_BE_REPLACED

In a recent interview, Henry Kissinger advised that the United States should not rush into defeating ISIS and similar groups since it could, … END_OF_DOCUMENT_TOKEN_TO_BE_REPLACED

When David Ray Griffin first released The New Pearl Harbor in 2004, it was the premiere book to ask, as its subtitle states, "disturbing … END_OF_DOCUMENT_TOKEN_TO_BE_REPLACED

Randy Benson's documentary The Searchers (2017) is an excellent look at the early researchers and research associated with the John F. Kennedy … END_OF_DOCUMENT_TOKEN_TO_BE_REPLACED