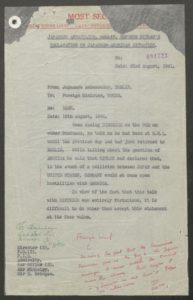 A newly unearthed document (reproduced in full in its original form for the first time in the U.S.) appears to prove that Adolf Hitler had clearly stated his intention to make war with the United States in the event of a military collision between the U.S. and Japan. The English (British) decryption and translation of the Japanese document quotes Hitler’s intentions as relayed to Sepp Dietrich, a key German military leader and one of Hitler’s most trusted supporters.

Dietrich had been Hitler’s bodyguard and chauffeur before his rapid ascension through the Nazi military. He rose to the rank of Oberst-Gruppenfuhrer in the Waffen-SS, the paramilitary branch of the SS, he commanded the 1st SS Panzer Corps in the Battle of Normandy, and he commanded the 6th Panzer Army at the Battle of the Bulge. Dietrich’s rapid ascent in the S.S. military hierarchy was facilitated by Nazi party powerbrokers after his crucial participation in the infamous Night of the Long Knives in 1934.

Hitler and Dietrich had personally traveled to Bad Wiessee to oversee the arrest of Ernst Rohm. Dietrich, at Hitler’s command, also executed SA leaders held at Stadelheim prison. Dietrich was a loyal Nazi soldier who had pledged an unyielding loyalty to Hitler. He was someone Hitler could trust implicitly in return.

The Document of Deception, Intrigue, and the Road to War

It was previously assumed that Hitler’s promise to make war with the Americans was a promise made to the Japanese Ambassador to Berlin, Baron Oshima. A major factor in the formulation of author Douglas Horne’s thesis in the two-volume Deception, Intrigue, and the Road to War, the document’s existence was referenced by three secondary sources in Horne’s work. Horne felt justified in its inclusion due to the agreed-upon provenance of the document’s origin having rested with the British National Archives.

In an e-mail correspondence with Midnight Writer News, Horne wrote, “As I state in my book, the Hitler promise was ‘hip pocket’ information for President [Franklin] Roosevelt, or a card up his sleeve, if you will — meaning, that he knew from late August 1941 onward that if he could not provoke a war fever in the U.S. over naval incidents with German U-boats in the North Atlantic – which was his hope, as secretly stated during the Argentia Conference – he could always fall back on this ‘back door to war.’ Namely, he could gain American entry into WWII and achieve his goal of fighting Hitler through a conflict with Japan.”

Churchill, “C,” and the Black Jumbos

The American code breakers were not the sole Allied possessors of Purple machines. The British had been given two such machines by the United States in 1941 – one was sent by the British to the Far East Combined Bureau (FECB) code breakers in Singapore and the other was retained by the Government Code and Cypher School (GCCS) at Bletchley Park. The GCCS was headed by “C,” Sir Stewart Menzies, the titular head of MI6 (Britain’s Secret Intelligence Service, or SIS).

It was a matter of routine for Prime Minister Winston Churchill to receive a variety of daily intelligence from “C” – Enigma, MAGIC from the Purple machine, etc. The Purple machine decryptions were labeled as “Black Jumbos” (BJ’s). Churchill would often compose marginalia on the Black Jumbos in red ink. “C” then provided answers in green ink.

In John Costello’s Days of Infamy (1994), Costello quoted Churchill’s red ink, which is notoriously difficult to read. Churchill’s marginalia read as follows: “In view of the fact that the Americans themselves gave us the key to the Japanese messages, it seems probable that the President knows this already.” A second sentence, even more difficult to decipher, states something about it being “vy [very] Desirable” that President Roosevelt is made aware of the HW1-25 message. What follows is a direct demand from Churchill: “Propose me action please.”

The Ways and Means of Winston

As Horne thoroughly details in Deception, FDR and Churchill discussed Japanese engagement while at Argentia (August 9-12, 1941). Churchill urged FDR to issue a harsh war warning to Japan. FDR’s warning would not only threaten war if Japan attacked either Malaya or Singapore. It would also move the U.S. further away from FDR’s promise of neutrality, something that, as already noticed by his isolationist opponents (i.e., the America First movement), had been happening for two years by the fall of 1941.

Churchill knew what the decrypted memo meant for Britain, but it was further clarified to historians as Churchill later recalled his feelings on the “day of infamy,” December 7, 1941. He wrote that he “slept the sleep of the saved” and that he felt that he knew “we had won the war.”

“This was [Churchill’s] reaction four days prior to Hitler’s declaration of war against America,” Horne wrote. “Odd? No, given Churchill’s knowledge of Hitler’s promise to Sepp Dietrich of August 15th (reiterated to Oshima by Ribbentrop at the end of November).”

Churchill’s own writings of Pearl Harbor Day verify that he did not desire that FDR proceed cautiously against Japan, one potential option regarding Churchill’s desire for FDR to see the decrypt, as stated in the red marginalia. Instead, Horne believes that Churchill found it “very Desirable” that FDR see the decrypt as soon as possible so that FDR would react more provocatively in drawing Japan into war. This would then further validate the “Back Door Into War” thesis.

Is There Evidence in American Files?

What Menzies, “C,” stated in green ink on August 24, 1941 was important. He replied to Churchill that “The Americans have had this message.” Because Churchill’s marginalia had twice directed the information be seen by Roosevelt, Menzies’ reference to the Americans, though general, can strongly be interpreted as “Roosevelt has this message.” Horne believes FDR would have seen the message shortly after returning from the Argentia Conference with Churchill in Newfoundland.

Assurances that “C” had accurate knowledge of American possession of the document can be given. “C” had a secret underwater cable TYPEX link to the British war-purchasing office, called INTREPID, in New York City. The INTREPID office was located at Rockefeller Plaza.

American evidence of the decrypt is further assured by the Department of Defense publication entitled “The MAGIC Background to Pearl Harbor,” declassified in 1977. MAGIC refers to the Purple communications intelligence in the detailed report. The American version of the August 15th Japanese diplomatic decrypt was recently found by Tom Kimmel, Jr., the grandson of Admiral Husband E. Kimmel, and forwarded to Douglas Horne as confirmation that “C” was absolutely correct in his marginalia to Churchill: the Americans did indeed “have that message.”

A careful historian could – and should ask a simple question regarding Hitler’s promises to Ambassador Oshima: Was Hitler honest?

Horne points out that Oshima was highly trusted by the Nazi’s, and that he had been for years. “Hitler was always loyal to his Axis partners,” Horne wrote. “Even if he was mendacious in his dealings with other European powers.”

Therefore, the two receivers of this information, Dietrich and Oshima, both loyalists or highly respected by the Nazi Party and Hitler himself, say much about the veracity of the information given.

The knowledge FDR had of this decrypt is what allowed him to be more aggressive in his directives toward the Japanese. With the knowledge that Germany would enter the war against the U.S. (FDR’s ultimate goal) if conflict with Japan arose, FDR could forego the frustrating cat-and-mouse game of his undeclared war against German U-boats in the North Atlantic. FDR was then able to draw Japan into war as a means by which he could then have carte blanche authority to dismantle the Third Reich.

Horne believes that Hitler’s declared intention (on August 15th, 1941) to go to war with America in the event of a collision between the U.S. and Japan was not simply adherence to the Tripartite Pact, since that Axis treaty of September 1940 was strictly defensive in nature, and would only have obligated Germany to attack the U.S. if America had initiated war with Japan.

Hitler’s declared intentions to Sepp Dietrich—relayed to Japanese Ambassador Oshima—were to make war on America regardless of who initiated the “collision” in the Pacific.  Even if Japan started the war with America, Hitler was determined to join in that conflict.

“Hitler,” says Horne, “was fed up with America’s official (and hypocritical) declaration of neutrality in regard to the war in Europe, while simultaneously engaging in acts of unmitigated assistance to Great Britain, such as the Destroyers-for-Bases Deal, and Lend-Lease.  In his mistaken belief that the U.S. would be totally preoccupied by a Pacific war with Japan, Hitler thought he could gain the revenge he sought against the U.S. and FDR by making war on America in the event Japan precipitated a war in the Pacific.”

[Douglas Horne discussed Hitler’s intention and FDR’s foreknowledge of Pearl Harbor on episode 007 of the Midnight Writer News Show. His two-volume Deception, Inrigue, and the Road to War was our featured work. Horne’s new writings can be read at his Inside the ARRB LiveJournal site.]

Hello, everyone. We have been in the midst of a state-to-state move that has been nothing short of challenging. It's lasted longer than we'd … END_OF_DOCUMENT_TOKEN_TO_BE_REPLACED

This is the 2018 Midnight Writer News Show theme song. There will be new clips in the 2019 version. Stay tuned for more! Thank you for … END_OF_DOCUMENT_TOKEN_TO_BE_REPLACED

The JFK Historical Group will host its annual conference on April 5-7, 2019 in Olney, IL. at Olney Central College. Speakers, to date, include: … END_OF_DOCUMENT_TOKEN_TO_BE_REPLACED

Regarding the audio stopping at the 9:21 mark of MWN Episode 048 - RFK Must Die - The Assassination of Bobby Kennedy..... (NOTE: For those who … END_OF_DOCUMENT_TOKEN_TO_BE_REPLACED

The 2017 theme song from the Midnight Writer News Show is now available for download, as well as for your listening pleasure. The 2018 theme will … END_OF_DOCUMENT_TOKEN_TO_BE_REPLACED

In a recent interview, Henry Kissinger advised that the United States should not rush into defeating ISIS and similar groups since it could, … END_OF_DOCUMENT_TOKEN_TO_BE_REPLACED

When David Ray Griffin first released The New Pearl Harbor in 2004, it was the premiere book to ask, as its subtitle states, "disturbing … END_OF_DOCUMENT_TOKEN_TO_BE_REPLACED

Randy Benson's documentary The Searchers (2017) is an excellent look at the early researchers and research associated with the John F. Kennedy … END_OF_DOCUMENT_TOKEN_TO_BE_REPLACED