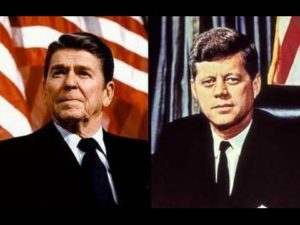 I recently wrote on Midnight Writer News about the lack of boldness in the Trump/GOP tax plan. Although my opinion has not changed, it should be noted that a lack of boldness does not equal ineffectiveness. Trump’s first legislative victory has sent the Democrats and the left into a rhetorical frenzy.  The demonization of Trump and the Republicans has come in the form of the usual clichés:  “trickle down is a proven failure,” “these cuts only benefit the wealthy,” “businesses will sit on all their cash,” blah blah blah. They love to remind us of the fact that businesses were flush with cash during the Obama years, yet instead of expanding and sharing that money with employees, businesses opted to pay down debt, buy back stock, and increase dividend payments.  This is true, but can you blame companies for practicing sound business management during that time?  After all, Obama was no friend to business, a’ la. “you didn’t build that.” Couple that with a severely bleak economic outlook and it becomes quite difficult to fault those villainous companies for holding onto their money.

Businesses decide what to do with their cash based on future expectations – in other words, how profitable does the future look? The Obama recovery is the worst on record going back to the Great Depression and barely averaged an annual GDP rate of 2%. With those growth prospects, what sane company would invest in expansion?

Today’s economy, however, is a much different story. Donald Trump’s first year in office has brought over 60 record new highs to the stock market (a leading economic indicator), and business optimism to all-time heights. With those come signs of a U.S. economic comeback in the making. This is evident when viewing economic indicators such as new home starts, consumer optimism, and monthly hiring numbers.  We have also just witnessed our second consecutive quarter of GDP growth above 3%, making a laughing stock of the left’s mantra that 2% growth is the “new norm.”

This up-tick in economic activity is occurring for two reasons. First, Trump has been eliminating crippling regulations that have choked the life out of business growth for far too long. The second reason has been that expectation of across-the-board tax cuts in both the individual and corporate rates. Businesses, risk takers, and investors now see profitability in a growing economy and are willing to expand, hire, and share the wealth with their employees. This should come as no surprise given how across-the-board tax cuts have worked in the past.

On three separate occasions Harry Truman vetoed legislation to cut taxes significantly. Truman signed only modest tax cuts, which occurred under the Revenue Act of 1948. These cuts fell victim to the axe once they were repealed in the 1950s due to the Korean War.

The economy suffered another downturn in 1960 and again entered into a recession.  Fortunately, this recession came on the heels of the JFK election and what would soon become a turning of the tide on tax cutting policy. Kennedy understood well the need to, as he put it, “get this country moving again” and announced his goal of 5% annual growth.

This ride was not smooth.  Kennedy’s first attempt at jumpstarting the economy was less that fruitful. Throughout 1961-1962 JFK applied the same failed Keynesian policies of his predecessors.  This was done on the advise of Paul Samuelson, James Tobin, and Robert Solow – all members of Kennedy’s Counsel of Economic Advisors.  JFK’s unsuccessful attempt at moving the economy let him to reverse course and instead implement the policy measures suggested by his “supply-siders” at the Treasury Department, Douglas Dillon and Stanley Surrey.

By this time, the economy had nearly reached double-digit unemployment with an even grimmer outlook going forward.  The new strategy called for immediate across-the-board tax cuts. This started by lowering the top tax rate from 91% to 70% with a 30% reduction in every tax bracket.  The corporate tax rate went form 52% to 47%, capital gains rates were lowered and numerous loop-holes were closed. These measures were coupled with a sound money strategy that returned the U.S. back to a strong dollar.

Sadly, Kennedy did not live long enough to witness the overwhelming success of his tax-cutting policies. Assassinated in 1963, JFK’s tax cuts were not implemented until 1964 under a grudgingly unenthused LBJ. Nevertheless, the results spoke for themselves. State and local revenues grew by over 40% above the standard baseline.  By 1967, federal receipts had increased 28% higher than those in 1963.  Meanwhile, the federal deficit dropped from $5.9 billion in 1964 to $1.6 billion in 1965.  Even though a wide string of Kennedy’s advisors had predicted an $83 billion loss to government revenues, from 1962 to 1968 federal revenues increased by a whopping $54 billion. The economy began moving again, eventually hitting Kennedy’s target of 5% GDP.  It was proof positive of how across-the-board tax cuts could spur economic growth.

Unfortunately, Johnson (who was no fan of Kennedy’s tax cuts) increased spending in his first three years in office by 10% and added a 10% surcharge to every income tax bracket.  LBJ’s policies began a drag on the economy that was followed up by Nixon; who kept the surcharge, increased the rates on capital gains from 25% to 35%, and added the alternative minimum tax.  Inflation maintained 5.5% per year and the economy experienced a double dip recession.

The recession of 1969-1971 saw consumer prices rise by twelve percent.  In 1971, 2.5 million people were left unemployed. Nixon’s next economic policy disaster – remove the U.S. dollar from the gold standard. By 1974 the country was back in a recession. The recession of 1974-1975 saw inflation rise by 11% the first year followed by a 9% rise the next year. The Dow had fallen 45% from its 1973 peak and unemployment skyrocketed to 8.4 million people; an unemployment rate of nine percent.  In 1976 the country entered into stagflation.

During 1978, Jimmy Carter cut the capital gains rate from 49% to 28%, however, he also expanded all individual income tax brackets. This policy, combined with a loose money strategy, did next to nothing in combating rising unemployment and soaring inflation. In 1979 and 1980, the U.S. witnessed two consecutive quarters of double digit inflation; something not felt since the Woodrow Wilson era of 1913.  Here, another two million people joined the ranks of the unemployed. Fortunately for the country, help was on the horizon.

Ronald Reagan saw the problem and called it out by name – “the Government”. Reagan, having witnessed the success of Kennedy’s 1964 tax cuts, moved to duplicate JFK’s policies and get the country back on track. Under Reagan, Congress passed the Economic Recovery Act of 1981.  The act gave individuals a 5% rate cut beginning in October of 1981 followed by a 10% rate cut in July of 1982 and another 10% rate cut in July of 1983.  It also cut the top marginal rate from 70% to 50% in January of 1982 and in 1985 began inflation adjusting tax brackets – otherwise known as “indexing.”

However, all of this did not come in enough time to prevent the worst recession since the 1930’s.  The recession of 1981-1982 was devastating.  Growth shrank at an annual rate of 5.6% and 12 million people were put out of the workforce; unemployment reached almost eleven percent.  Inflation of 10% in 1981 and 6% in 1982, along with the Federal Reserve’s misguided strategy of raising interest rates, negated almost all of the tax cut’s savings.  However, once Fed chairman Paul Volcker properly adjusted monetary policy, a dramatic shift occurred in the economy.

Democrats love shamelessly touting the falsehood that Reagan’s tax cuts were an undisputed failure. Taking a page form Joseph Goebble’s playbook (“a lie, repeated often enough, will eventually become the truth”) has given them a great rhetorical talking point. Nonetheless, it is intellectually dishonest and factually inaccurate.

Reagan’s success peaks volumes to the effectiveness of across-the-board tax cuts.  In the last five months of 1982 the stock market rose by thirty percent.  Between 1982 and 1983 the economy added 19 million new jobs and inflation dropped by an unimaginable 75%. The rate of growth experienced in 1983-1984was astronomical: 5.3% in the first quarter and five consecutive quarters of growth above 7% – a historical first on any U.S. economic record of GDP.

Reagan’s economic boom did not end there. The Tax Relief Act of 1986 eliminated all tax brackets except for two: a 15% bracket and a top bracket at the 28% rate. The results were astounding. Government revenues nearly doubled from $500 billion to $909 billion. Crushing double-digit inflation when Reagan took office fell steadily throughout the remainder of the 80s averaging 3%, while growth averaged 4% throughout that same period.

Meanwhile, the economy jumped by leaps and bounds in business growth, economic investment, new home sales, personal saving, median family income, along with a host of other economic indicators.  All of this set the stage for the longest bull market run in U.S. history.  Deficits aside (which did increase, but for reasons related to spending not tax cuts) the Reagan economy led to the type of growth not even witnessed under the boldness of JFK.

Looking at the present, it is all too important that we focus on the past.  Kennedy understood the significance of serious tax cuts when he stated, “Every dollar released from taxation that is spent or invested will help create a new job and a new salary. And these new jobs and new salaries can create other jobs and other salaries and more customers and more growth for an expanding American economy….”

JFK recognized that high taxation “siphons out of the private economy too large a share of personal and business purchasing power; that it reduces the financial incentives for personal effort, investment, and risk-taking.” The approach taken by Kennedy was that of Mellon and Coolidge which produced the “Roaring 20s.” Reagan, witnessing Kennedy’s success, drew on the policies of JFK and created economic magic.  Let the proven policies of the past speak for themselves and they will sing us a song of unparalleled prosperity.  Going forward, let us enjoy that sweet music, and allow the rhetoric and the falsehoods on tax cuts to be reduced to the ashes of the so-called new norm.

Hello, everyone. We have been in the midst of a state-to-state move that has been nothing short of challenging. It's lasted longer than we'd … END_OF_DOCUMENT_TOKEN_TO_BE_REPLACED

This is the 2018 Midnight Writer News Show theme song. There will be new clips in the 2019 version. Stay tuned for more! Thank you for … END_OF_DOCUMENT_TOKEN_TO_BE_REPLACED

The JFK Historical Group will host its annual conference on April 5-7, 2019 in Olney, IL. at Olney Central College. Speakers, to date, include: … END_OF_DOCUMENT_TOKEN_TO_BE_REPLACED

Regarding the audio stopping at the 9:21 mark of MWN Episode 048 - RFK Must Die - The Assassination of Bobby Kennedy..... (NOTE: For those who … END_OF_DOCUMENT_TOKEN_TO_BE_REPLACED

The 2017 theme song from the Midnight Writer News Show is now available for download, as well as for your listening pleasure. The 2018 theme will … END_OF_DOCUMENT_TOKEN_TO_BE_REPLACED

In a recent interview, Henry Kissinger advised that the United States should not rush into defeating ISIS and similar groups since it could, … END_OF_DOCUMENT_TOKEN_TO_BE_REPLACED

When David Ray Griffin first released The New Pearl Harbor in 2004, it was the premiere book to ask, as its subtitle states, "disturbing … END_OF_DOCUMENT_TOKEN_TO_BE_REPLACED

Randy Benson's documentary The Searchers (2017) is an excellent look at the early researchers and research associated with the John F. Kennedy … END_OF_DOCUMENT_TOKEN_TO_BE_REPLACED