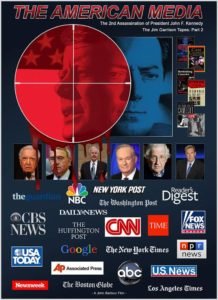 The American Media & The Second Assassination of John F. Kennedy is a searing, enraging, and eye-opening documentary about how Jim Garrison, New Orleans’ District Attorney from 1962-1973, had set out to prove, using the American justice system, that the CIA was actually behind the assassination of JFK on November 22nd, 1963, and that the mainstream media was responsible for covering up the truth with fake news/propaganda. Essentially, the mainstream media were like “Good Germans.” Garrison was far from a Good German, though, as he dared to question the Warren Commission report which included very weak and even fabricated evidence that pointed to Lee Harvey Oswald as the lone gunman. He was not afraid to kick the hornet’s nest, so-to-speak. The CIA wanted the public to believe that the bullet that killed JFK entered through the back of his head instead of the front like expert pathologists had observed but were suppressed. No one in the media questioned why JFK’s motorcade route’s plan was changed at the very last minute or why the car’s bubble top was removed—or who made those decisions to begin with.
Director John Barbour blends archival footage from his 3-hour interview with Jim Garrison as well as video of the Zapruder tape, interviews with witnesses, and clips which show concrete evidence of how the mainstream media mislead the public with false information. There’s even a clip of Noam Chomsky making a very callous statement about how little he cares about the JFK assassination or who was behind it. It’s very suspicious that many witnesses and people related to the investigation died of “suspect” suicides after the assassination while no witnesses died during other well-known investigations like the O.J. Simpson murder case. Bravo to Jim Garrison and John Barbour for being true patriots, unlike the mainstream media who’s has been and still is in bed with the U.S. government. The government is essentially a pimp while the mainstream media serves as its prostitutes. Media figures, i.e. Dan Rather, who helped the government spread misinformation to cover-up the truth about JFK’s assassination became more wealthy and successful.
The film’s running time of 2 hours and 10 minutes might seem a bit lengthy at first, but it does cover a lot of ground, and there’s never a dull moment to be found. The crisp, fast-paced editing also helps to enliven the film. The narration by Barbour himself is humorous and witty at times—humor, after all, is a great way of hooking audiences. In other words, he manages to find just the right balance between entertaining the audience and provoking them emotionally as well as intellectually just like a truly great documentary ought to do. By the end of the film, you will never look at the mainstream media nor the CIA the same way again. Consider it your patriotic duty to see The American Media & The Second Assassination of John F. Kennedy. It opens at Cinema Village.

NYCMovieGuru has allowed MidnightWriterNews.com to print this review. You can read the original at http://nycmovieguru.com/june9th17.html#americanmedia&jfk.

Hello, everyone. We have been in the midst of a state-to-state move that has been nothing short of challenging. It's lasted longer than we'd … END_OF_DOCUMENT_TOKEN_TO_BE_REPLACED

This is the 2018 Midnight Writer News Show theme song. There will be new clips in the 2019 version. Stay tuned for more! Thank you for … END_OF_DOCUMENT_TOKEN_TO_BE_REPLACED

The JFK Historical Group will host its annual conference on April 5-7, 2019 in Olney, IL. at Olney Central College. Speakers, to date, include: … END_OF_DOCUMENT_TOKEN_TO_BE_REPLACED

Regarding the audio stopping at the 9:21 mark of MWN Episode 048 - RFK Must Die - The Assassination of Bobby Kennedy..... (NOTE: For those who … END_OF_DOCUMENT_TOKEN_TO_BE_REPLACED

The 2017 theme song from the Midnight Writer News Show is now available for download, as well as for your listening pleasure. The 2018 theme will … END_OF_DOCUMENT_TOKEN_TO_BE_REPLACED

In a recent interview, Henry Kissinger advised that the United States should not rush into defeating ISIS and similar groups since it could, … END_OF_DOCUMENT_TOKEN_TO_BE_REPLACED

When David Ray Griffin first released The New Pearl Harbor in 2004, it was the premiere book to ask, as its subtitle states, "disturbing … END_OF_DOCUMENT_TOKEN_TO_BE_REPLACED

Randy Benson's documentary The Searchers (2017) is an excellent look at the early researchers and research associated with the John F. Kennedy … END_OF_DOCUMENT_TOKEN_TO_BE_REPLACED