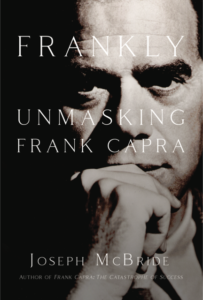 Author, Film Historian, and JFK assassination researcher Joseph McBride joins S.T. Patrick to discuss his newest book, Frankly: Unmasking Frank Capra. The book is about the “Kafkaesque” journey McBride endured in trying to publish a truthful biography of director Frank Capra (1992’s Frank Capra: The Catastrophe of Success).  Its an illustrative story about what it’s like to try to do truthful history in a time where Americans still prefer a sterilized patriotic mythology to a more difficult truth. While working on the Capra bio in 1985, McBride also made an interesting discovery about George H.W. Bush. This discovery would lead to 35 pages of McBride’s seminal work on the Kennedy assassination, Into the Nightmare, as well as the first chapter of Russ Baker’s Family of Secrets. In this episode, McBride tells the story of that discovery and discusses its meaning. He also discusses his role as an actor in Orson Welles’s The Other Side of the Wind, which is ow available on Netflix. Joseph McBride was an amazing guest and this is a story that everyone who cares about the future of non-fiction writing at all should hear!

INTO THE NIGHTMARE: MY SEARCH FOR THE KILLERS OF PRESIDENT JOHN F. KENNEDY AND OFFICER J. D. TIPPIT (2013)

Review: How Did Lubitsch Do It?: Joseph McBride’s engaging study of filmmaker Ernst Lubitsch

An interview with film historian and biographer Joseph McBride, author of How Did Lubitsch Do It?

This is the 2018 Midnight Writer News Show theme song. There will be new clips in the 2019 version. Stay tuned for more! Thank you for … END_OF_DOCUMENT_TOKEN_TO_BE_REPLACED

The JFK Historical Group will host its annual conference on April 5-7, 2019 in Olney, IL. at Olney Central College. Speakers, to date, include: … END_OF_DOCUMENT_TOKEN_TO_BE_REPLACED

Regarding the audio stopping at the 9:21 mark of MWN Episode 048 - RFK Must Die - The Assassination of Bobby Kennedy..... (NOTE: For those who … END_OF_DOCUMENT_TOKEN_TO_BE_REPLACED

The 2017 theme song from the Midnight Writer News Show is now available for download, as well as for your listening pleasure. The 2018 theme will … END_OF_DOCUMENT_TOKEN_TO_BE_REPLACED

In a recent interview, Henry Kissinger advised that the United States should not rush into defeating ISIS and similar groups since it could, … END_OF_DOCUMENT_TOKEN_TO_BE_REPLACED

When David Ray Griffin first released The New Pearl Harbor in 2004, it was the premiere book to ask, as its subtitle states, "disturbing … END_OF_DOCUMENT_TOKEN_TO_BE_REPLACED

Randy Benson's documentary The Searchers (2017) is an excellent look at the early researchers and research associated with the John F. Kennedy … END_OF_DOCUMENT_TOKEN_TO_BE_REPLACED