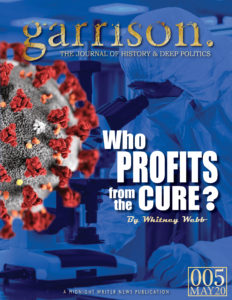 Buy it here in PRINT or on E-BOOK: https://www.lulu.com/spotlight/MidnightWriterNews

204 pages. In the fifth issue of garrison.: The Journal of History & Deep Politics, Whitney Webb looks at the company that will profit most from a COVID cure. In current events, Richard Bartholomew spotlights the “Deep Political Realities” of the 2016 and 2020 elections, Deep Throat attorney John O’Connor examines the modern -Gate theories in comparison with Watergate, Douglas Horne assesses the departure of Chris Matthews from MSNBC, and Gary Schoener pays tribute to late researcher Jerry Policoff. Joseph Green takes a contextual look at the legacy of MLK, David Ray Griffin writes about the fall of the World Trade Center’s twin towers on 9/11, Kevin Ryan discusses faulty arguments in the 9/11 debate, and Caitlin Johnstone takes her unique look at the crumbling world. In the field of JFK research, Edgar Tatro explores LBJ & the Bounty Hunter; Vincent Salandria looks at the “false mysteries;” James DiEugenio examines JFK, Sukarno, and the Battle for Indonesia; Gary Shaw looks at the Kennedy assassination through some of the most important questions and answers; Walt Brown mathematically looks at the activity of the Warren Commission; Casey Quinlan and Brian Edwards delve into the testimony of Ed Hoffman; Ron Bulman writes about Jack Ruby; and Timothy Smith looks at the truthfulness of history through the lens of Father Oscar Huber’s most infamous statement. In addition, we are re-printing the late Jerry Policoff’s wonderful work “How All the News About Political Assassinations in the U.S. Has Not Been Fit to Print in the New York Times.”

This is the 2018 Midnight Writer News Show theme song. There will be new clips in the 2019 version. Stay tuned for more! Thank you for … END_OF_DOCUMENT_TOKEN_TO_BE_REPLACED

The JFK Historical Group will host its annual conference on April 5-7, 2019 in Olney, IL. at Olney Central College. Speakers, to date, include: … END_OF_DOCUMENT_TOKEN_TO_BE_REPLACED

Regarding the audio stopping at the 9:21 mark of MWN Episode 048 - RFK Must Die - The Assassination of Bobby Kennedy..... (NOTE: For those who … END_OF_DOCUMENT_TOKEN_TO_BE_REPLACED

The 2017 theme song from the Midnight Writer News Show is now available for download, as well as for your listening pleasure. The 2018 theme will … END_OF_DOCUMENT_TOKEN_TO_BE_REPLACED

In a recent interview, Henry Kissinger advised that the United States should not rush into defeating ISIS and similar groups since it could, … END_OF_DOCUMENT_TOKEN_TO_BE_REPLACED

When David Ray Griffin first released The New Pearl Harbor in 2004, it was the premiere book to ask, as its subtitle states, "disturbing … END_OF_DOCUMENT_TOKEN_TO_BE_REPLACED

Randy Benson's documentary The Searchers (2017) is an excellent look at the early researchers and research associated with the John F. Kennedy … END_OF_DOCUMENT_TOKEN_TO_BE_REPLACED