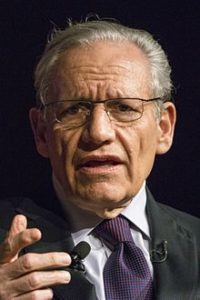 This is first in a series of articles that will look at the career of Washington Post Associate Editor Bob Woodward. Fear: Trump in the White House is Woodward’s 19th book and reportedly sold over 750,000 units on Publish Day alone. Watergate revisionists and chroniclers of Woodward’s career still have questions about his methods, his tactics, and the validity of his theses. This is Part One.

Implicit in the “Note to Readers” that opens Bob Woodward’s newest book is an act of faith. Woodward trusts that the reader trusts him. “Interviews for this book were conducted under the journalistic ground rule of ‘deep background,’ ” Woodward writes.

Woodward, now an associate editor with The Washington Post, then defines “deep background.” He can use all information gathered from “hundred of hours of interviews” with “firsthand participants and witnesses” whose names you’ll never know. In case the reader questions his accuracy in repeating these quotations and stories, Woodward then informs the public that “nearly all” of the interview participants have allowed him to record the conversations “so the story could be told with more precision.” It is not clear how many interviews were actually conducted, and the specific percentage of recordings referred to as “nearly all” is not precisely known either. This is important because there is no evidence accompanying those unrecorded interviews. The interviewee would surely deny them, and the accuracy of such reports hinges on the reporter’s own trustworthiness. This is but one of the many problems with “deep background,” a journalistic information magnet strategy Woodward popularized during the Watergate era. Today, every interviewee for Fear is a Deep Throat.

Even when attributing exact quotations, Woodward admits that they may come from the person being quoted, but they may also stem from a colleague with direct knowledge or from someone’s meeting notes. But not all meeting notes are created equal, and because we do not know the source in many of these instances, we cannot question the motivations or backgrounds or prior relationships of the source attributing the quote, thought, or conclusion. Therefore, even the attributions are a cloudy haze of the journalistic cloak-and-dagger games that Woodward mastered and legitimized to push his narratives to notable and profitable heights.

Fear: Trump in the White House is Woodward’s 19th book. His fame came from his Watergate reporting with co-author and fellow Washington Post journalist Carl Bernstein. That’s the story we are supposed to believe: It was the stellar work of a muckraking journalist that made him famous. The little guys hustled to bring down the Big Bad Wolves of Pennsylvania Avenue e.g. the Nixon White House. All the President’s Men was released in 1974, and all the American stereotypes applied two years before the nation’s bicentennial: that hard work eventually triumphs, that good wins over evil, that David really can ground Goliath, and that the new Mr. Smiths going to Washington to speak truth to power are the journalists who work tirelessly to assure that truth reigns.

The problem with that red, white, and blue Horatio Alger myth was that it was Hollywood – literally. Woodward and Bernstein did not commit to writing All the President’s Men until actor Robert Redford had expressed interest in purchasing the film rights. In Telling the Truth About Lies: The Making of All the President’s Men, Woodward also noted that Redford urged “Wood-stein” to change the narrative from a tale of Nixonian dirty deeds to one that was based on the journey of two journalists, Woodward and Bernstein. Redford would play the role of Woodward and Dustin Hoffman would play Bernstein. The film was nominated for Best Picture in 1976 but lost to Rocky. For Woodward and Bernstein, however, their careers were made. Redford and Hoffman perfectly portrayed everything Americans wanted their journalists to be, down to being sloppy dressers, coffee inhalers, and chain smokers. Most importantly, they were heroes.

The film adaptation of Woodward and Bernstein’s first book coincided with the release of their second Nixon-era exposé, The Final Days. This book was different only in that its heroes were former and current military men, frustratingly skirting protocol and even law solely in an effort to save the Republic from a president who had become unhinged. More than in All the President’s Men, Woodward’s pattern of assessing presidencies would begin in The Finals Days.

The hero of The Final Days was Gen. Alexander Haig, retired from the Army and someone who had climbed the national security ranks to become Chief of Staff after the resignation of H.R. Haldeman. After Woodward and Bernstein, the hero of All the President’s Men had been Woodward’s “deep background” source, Deep Throat. Though Woodward revealed – or at least informed us – in 2005 that Deep Throat was FBI Associate Director Mark Felt, Watergate revisionists knew more about the real Bob Woodward that the mainstream media was portraying and had good reasons to question the trustworthiness of Felt as the lone, chief, or majority source behind the revelations attributed to Deep Throat.

Woodward had his own secret origin, and it was one that would alter the way keen students of history and the Watergate era viewed his faux heroism, his journalistic methods, the role of Haig, and the character of Deep Throat.

Hello, everyone. We have been in the midst of a state-to-state move that has been nothing short of challenging. It's lasted longer than we'd … END_OF_DOCUMENT_TOKEN_TO_BE_REPLACED

This is the 2018 Midnight Writer News Show theme song. There will be new clips in the 2019 version. Stay tuned for more! Thank you for … END_OF_DOCUMENT_TOKEN_TO_BE_REPLACED

The JFK Historical Group will host its annual conference on April 5-7, 2019 in Olney, IL. at Olney Central College. Speakers, to date, include: … END_OF_DOCUMENT_TOKEN_TO_BE_REPLACED

Regarding the audio stopping at the 9:21 mark of MWN Episode 048 - RFK Must Die - The Assassination of Bobby Kennedy..... (NOTE: For those who … END_OF_DOCUMENT_TOKEN_TO_BE_REPLACED

The 2017 theme song from the Midnight Writer News Show is now available for download, as well as for your listening pleasure. The 2018 theme will … END_OF_DOCUMENT_TOKEN_TO_BE_REPLACED

In a recent interview, Henry Kissinger advised that the United States should not rush into defeating ISIS and similar groups since it could, … END_OF_DOCUMENT_TOKEN_TO_BE_REPLACED

When David Ray Griffin first released The New Pearl Harbor in 2004, it was the premiere book to ask, as its subtitle states, "disturbing … END_OF_DOCUMENT_TOKEN_TO_BE_REPLACED

Randy Benson's documentary The Searchers (2017) is an excellent look at the early researchers and research associated with the John F. Kennedy … END_OF_DOCUMENT_TOKEN_TO_BE_REPLACED