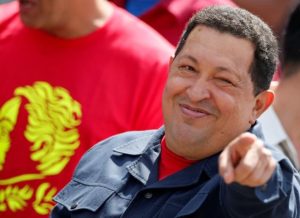 The mainstream media is built upon sensationalizing misery, death, and destruction. Yet, somehow it is almost speechless when it comes to the tragedy of Venezuela.  For an industry addicted to promoting hell on earth.  Venezuela provides limitless news stories.  Sadly, the mainstream media is disinterested.  One can only speculate as to why.

We all know how the left loves socialism.  They clamor for it endlessly.  Their never ending quest to reshape America into a socialist utopia is an unceasing endeavor.  So why is there such scant coverage concerning Venezuela’s current plight?  Is it because doing so would expose how Hugo Chavez’s great socialist experiment sank the oil-rich nation into a turmoil and despair?  Maybe it’s because Venezuela’s corruption highlights what eventually happens in socialist countries.

The current suffering of the Venezuelan people is unimaginable.  Riots are commonplace crime and violence is widespread; starvation and human suffering infect every corner of the country.  Power outages are frequent and sanitation services are non-existent.  The rule of law has suffered breakdown.  Their currency is in a free-fall due to soaring inflation and the unemployment rate is astronomical.  Medicine is in short supply and food is so scarce that Venezuelans have resorted to eating zoo animals.  Worse, there appears to be no end in sight for Venezuela’s spiral into the abyss.

Unfortunately, Venezuela’s dilemma is far from unique.  This is the hallmark of socialism.  It is a system that destroys prosperity, suppresses freedom, reduces equality, and leaves all it touches in utter ruin.  No wonder the mainstream media refuses to give Venezuela the attention it deserves.  Doing so would expose the disastrous effects of socialist policies – the very same policies cherished by left-wing media outlets and their allies.

In the age of increasing support for bigger government, Venezuela is the story of the century; and so, it is precisely for that reason why the Venezuelan tragedy remains out of focus of the mainstream media’s lens.  With the American left moving closer to socialism by the day, how could the mainstream media possibly be expected to do its job?  (After all, there’s a mid-term election to think about.)

I want to know when those ardent Chavez supporters like Oliver Stone and Sean Penn are going to apologize to the people of Venezuela for sponsoring the destruction of their country? I won’t hold my breath since there’s a better chance work of socialism actually working somewhere before they admit they were wrong.  In spite of Venezuela’s collapse, politicians like Bernie Sanders, Corey Booker, Kamala Harris, and Elizabeth Warren will fight to the death to implement their socialist agendas, because they are smart enough to make it work.

So the next time you hear about great socialist policies like universal healthcare, free college, a guaranteed job or a universal income; stop and ask yourself, “How come you’re not hearing about Venezuela?”

Hello, everyone. We have been in the midst of a state-to-state move that has been nothing short of challenging. It's lasted longer than we'd … END_OF_DOCUMENT_TOKEN_TO_BE_REPLACED

This is the 2018 Midnight Writer News Show theme song. There will be new clips in the 2019 version. Stay tuned for more! Thank you for … END_OF_DOCUMENT_TOKEN_TO_BE_REPLACED

The JFK Historical Group will host its annual conference on April 5-7, 2019 in Olney, IL. at Olney Central College. Speakers, to date, include: … END_OF_DOCUMENT_TOKEN_TO_BE_REPLACED

Regarding the audio stopping at the 9:21 mark of MWN Episode 048 - RFK Must Die - The Assassination of Bobby Kennedy..... (NOTE: For those who … END_OF_DOCUMENT_TOKEN_TO_BE_REPLACED

The 2017 theme song from the Midnight Writer News Show is now available for download, as well as for your listening pleasure. The 2018 theme will … END_OF_DOCUMENT_TOKEN_TO_BE_REPLACED

In a recent interview, Henry Kissinger advised that the United States should not rush into defeating ISIS and similar groups since it could, … END_OF_DOCUMENT_TOKEN_TO_BE_REPLACED

When David Ray Griffin first released The New Pearl Harbor in 2004, it was the premiere book to ask, as its subtitle states, "disturbing … END_OF_DOCUMENT_TOKEN_TO_BE_REPLACED

Randy Benson's documentary The Searchers (2017) is an excellent look at the early researchers and research associated with the John F. Kennedy … END_OF_DOCUMENT_TOKEN_TO_BE_REPLACED