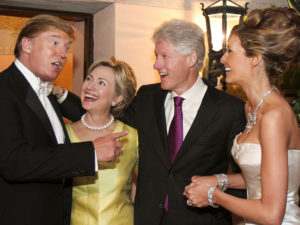 Riots in the streets of Portland, Oregon. Ivy League college students asking for exams to be postponed so that they may mourn. The severing of relationships. A Manhattan elementary school leading children in a group singing of We Shall Overcome. The single most contentious day in the history of Facebook. Massive unfriending.

These are the fruits of Donald J. Trump’s victory in the 2016 U.S. presidential election.

The Politics of Perspective: What Is This, Anyway?

“Perspective gives us the ability to accurately contrast the large with the small, and the important with the less important. Without it we are lost in a world where all ideas, news, and information look the same. We cannot differentiate, we cannot prioritize, and we cannot make good choices.” — John Sununu, Fmr. Gov. of New Hampshire and White House Chief of Staff to President George H.W. Bush

A hallmark of the American republic has for centuries been a steadfast belief in the peaceful transition of power that occurs constitutionally every four or eight years. It is what keeps the United States and other civilized countries from being Banana Republics where heads of state circle through palaces like a revolving door at the entrance of a city skyscraper. America is not a place where leaders (sans Lyndon Johnson) are thrust into power as a result of military coups or covert operations. The lack of perspective in the days following the election of 2016 is all the more perplexing when you consider that the candidates who were actually involved in the race are neither as flummoxed nor as enraged as the citizens currently experiencing emotional meltdowns across America.

Politics is an endeavor constructed for those with short memories and thick skin. It’s the rule, not the exception. After a devastating earthquake in Haiti in 2010, President Bill Clinton and President George W. Bush together formed a fund to send aid to Haitians. Promotional sports for the Fund showed the former presidents from different parties side-by-side.

While there was a sense that the two ruling families couldn’t co-exist in the same location, that sense was wrong. The animosity is perceived – or maybe even wished for – by citizen partisans who have been puppeteered into a belief that politics is a sporting event. It is a citizen’s obligation to choose one of two logos to cheer and the other to boo. The cheers and the jeers will be performed on command, complete with political gestures that elicit gestures as clumsily as basic pro wrestling ring psychology.

The Politics of Perspective: …And Who Are They?

This week, Americans on both sides of the political spectrum have shown a lack of political memory and historical consciousness. Trump supporters joyously believe the Cranky Red Giant has been slain, while Clinton semi-loyalists bemoan the Rise of the Fourth Reich. Who doesn’t believe that? Two Americans, for starters: Donald J. Trump and Hillary Rodham-Clinton.

Bill and Hillary Clinton attended the 2005 wedding of Donald Trump to Melania Knauss. While President Clinton attended only the reception, Hillary also attended the ceremony, a more personal gesture of support. Despite the contention of the election year(s), it has been reported that daughters Ivanka Trump and Chelsea Clinton are friends who have been seen together multiple times in New York City.

Trump has reportedly given between $100,000 and $250,000 to a Clinton Foundation long suspected and criticized as a safety deposit box from world leaders (and families) who not only espouse but practice human rights policies that are diametrically opposed to those championed by both the Clintons and the Trumps. Trump, himself, has donated to Hillary Clinton campaigns four times: 2002, 2005, 2006, and 2007.

Despite the fact that Trump had very publicly questioned her boss’s legitimacy as both President of the United States and a natural born citizen, Hillary Clinton’s family invited the Trumps to Chelsea’s wedding in July 2010.

While media pundits were predicting the never-to-be rise of Jeb Bush to the Republican nomination in July 2015, it was Hillary Clinton who kept calling Donald Trump “the Republican frontrunner.” Trump had previously referred to Clinton as a “terrific woman.” The two families had been so close in the past that some were even speculating that Trump was in the race solely to thrust Clinton into the White House while at the same time further building his own brand.

These are two families that were, are, and will remain more close than cordial, more the same than different, more entrenched than outsider, and more friendly than enraged.

The Politics of Perspective: So, Who Are We?

We should remember that politics and history are also self-correcting ventures. The conservatism of Harding, Coolidge, and Hoover were replaced by the liberal lion Franklin D. Roosevelt. The moderate Republican general from Kansas, Dwight Eisenhower, was replaced by the intellectual Massachusetts Senator, John F. Kennedy. The Ford-Carter years of international timidity were followed by Ronald Reagan.

While America has experienced post-election violence and protests before – after all, southern states seceded from the union as a direct result of Abraham Lincoln’s election in 1860 – we have never experienced a presidency so ghastly that its worst sins could not be corrected by the next occupant at 1600 Pennsylvania Avenue. Trump supporters believe he is a corrective of the Obama years and the next president will be elevated to his or her position based in part of the political flubs of the Trump presidency.

Other than the finalities of war from which there is no recovery, policies are cast in clay and not steel.

The Politics of Perspective: When the Sky Falls

As you reflect on the election of 2016, do so with some perspective. Remember that your next responsibility will be to someone in your home. The impact of that situation will be a result of your own personal policy decisions, not those of Barack Obama or Donald Trump.

You will then be affected by events on or around your street, then your neighborhood, then your section of town, then your town, then your county, then your state, and then, finally, your country. Life is a decision-based journey that is reflective of your will, your values, your morals, your relationships, and your decisions. Your greatest triumphs will not be the result of a presidential executive order, a papal dispensation, or a Community Chest card from Monopoly. For the vast majority of Americans from all political parties, life’s greatest failures will not stem from a presidential overreach or a misguided quote. Your days have only one dictator – you.

There is an old adage that says that eight out of ten things you worry about never actually happen. If that is the case then FDR could be right, after all. Maybe the only thing we do have to fear is fear itself.

Hello, everyone. We have been in the midst of a state-to-state move that has been nothing short of challenging. It's lasted longer than we'd … END_OF_DOCUMENT_TOKEN_TO_BE_REPLACED

This is the 2018 Midnight Writer News Show theme song. There will be new clips in the 2019 version. Stay tuned for more! Thank you for … END_OF_DOCUMENT_TOKEN_TO_BE_REPLACED

The JFK Historical Group will host its annual conference on April 5-7, 2019 in Olney, IL. at Olney Central College. Speakers, to date, include: … END_OF_DOCUMENT_TOKEN_TO_BE_REPLACED

Regarding the audio stopping at the 9:21 mark of MWN Episode 048 - RFK Must Die - The Assassination of Bobby Kennedy..... (NOTE: For those who … END_OF_DOCUMENT_TOKEN_TO_BE_REPLACED

The 2017 theme song from the Midnight Writer News Show is now available for download, as well as for your listening pleasure. The 2018 theme will … END_OF_DOCUMENT_TOKEN_TO_BE_REPLACED

In a recent interview, Henry Kissinger advised that the United States should not rush into defeating ISIS and similar groups since it could, … END_OF_DOCUMENT_TOKEN_TO_BE_REPLACED

When David Ray Griffin first released The New Pearl Harbor in 2004, it was the premiere book to ask, as its subtitle states, "disturbing … END_OF_DOCUMENT_TOKEN_TO_BE_REPLACED

Randy Benson's documentary The Searchers (2017) is an excellent look at the early researchers and research associated with the John F. Kennedy … END_OF_DOCUMENT_TOKEN_TO_BE_REPLACED