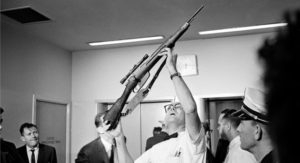 A recent Politico article (“How the CIA Came to Doubt the Official Story of JFK’s Murder,” August 3rd, 2017) has come under fire throughout the JFK assassination research community.

The article, written by authors Philip Shenon (A Cruel and Shocking Act: The Secret History of the Kennedy Assassination) and Larry Sabato (The Kennedy Half-Century), acknowledges, in its closing paragraph, that “It does not reflect well on the legacy of either the CIA or the [Warren] [C]ommission that… the newly released documents suggest that at least some of those conspiracy theories may be true.”

Their conclusion, however, is laid bare a few paragraphs earlier: “None of the files released last week undermines the Warren Commission’s finding that Oswald killed Kennedy with shots fired from his perch on the sixth floor of the Texas School Book Depository in Dallas’ Dealey Plaza—a conclusion supported by 21st century forensic analysis—and that there was no credible evidence of a second gunman.”

Researcher and author Douglas Horne (the five-volume Inside the Assassination Records Review Board and JFK’s War with the National Security Establishment) disagrees with the lone conclusion of Shenon and Sabato.

“My 2014 presentation proves that any trustworthy 21st century forensic analysis would admit that the medico-legal foundation for Oswald’s supposed ‘guilt’ is so tainted and compromised that there could be no conclusion of his guilt at any trial today,” Horne wrote in an e-mail exchange with Midnight Writer News. “If I am correct in this conclusion of mine, then the assertion made by Philip Shenon and Larry Sabato in their article on August 3, 2017 is indefensible, and demonstrably incorrect.”

Horne’s two-and-a-half hour presentation to a JFK assassination symposium in Washington D.C. in September 2014 can be viewed on Midnight Writer News.

An Act of Shenon

Throughout the article, the authors offer an apple as they take prime rib. This was the same style used throughout Shenon’s A Cruel and Shocking Act. Shenon made the AM radio and podcast appearances (We the People with Jesse Ventura, etc) someone would make if he were deliberately peddling his work to JFK assassination researchers and truth seekers – which he was. His title conjures an emotional response from those who believe much has been deliberately hidden and kept secret, yet his thesis is only a slight variation from the Warren Commission’s.

The mammoth, Bugliosiesque 626-page hardcover edition of Shenon’s work (now available in abundance for $6.98 on Barnes & Noble’s bargain racks) begins not with blurbs from respected researchers such as Horne or Jim DiEugenio. The book borrows its title from Justice Earl Warren’s commission, which Shenon quotes in blurb form on its first page.

“The assassination of John Fitzgerald Kennedy on November 22, 1963, was a cruel and shocking act of violence directed against a man, a family, a nation, and against all mankind,” the commission hastily stated in its final report on September 24, 1964.

Shenon’s thesis is that Kennedy’s life could have been saved had the FBI and CIA been more forthcoming and efficient in their neutralization of Lee Harvey Oswald before November 22, 1963. He then believes that the Warren Commission further added to the confusion by bungling the investigation. Those intelligence failures and the WC’s bungling then added to a mounting level of confusion and suspicion, which resulted in a volcanic spewing of conspiracy theories attempting to logically answer for the failures.

Many researchers believe that the evidence against the Warren conclusions is so prodigious that anyone arguing for a simple lone nut case would, could and should be instantly discredited. It has been the growing amount of anti-commission evidence that has birthed a new generation of pro-commission authors. These authors, like Shenon, will concede governmental failures. However, they believe that the failures are failures to share intelligence, document pre-event threats, and resolve bureaucratic breakdowns of both policy and process. It may or may not be coincidence that these are the same arguments used to defend the official stories of Pearl Harbor and 9/11.

On page 600, Shenon recommends Gerald Posner’s Case Closed and bestows the title of “the nation’s two great historians on the assassination” to Max Holland and Vincent Bugliosi. Shenon calls Bugliosi’s Reclaiming History a “masterwork” and claims that it “sat on [his] desk for most of the last four years” as he wrote A Cruel and Shocking Act.

Sabato and Allbritton: The Road to Here

Larry Sabato’s Center or Politics received over $7 million in earmarked funds from Congressman Virgil Goode (R-VA). Sabato, one of MSM’s favorite election predictors, had predicted a Goode victory in 2008. Sabato should have disvlosed the funds and recused himself from predicting the race. He didn’t, and Goode lost the election.

Politico was started by media mogul Robert Allbritton, a trustee of the Lyndon Baines Johnson Library and Museum and donor to the Clinton Foundation. Allbritton had been the CEO of Riggs National Corporation, the parent of Riggs Bank. Twenty-three presidents have banked at Riggs (Martin Van Buren to Richard Nixon). Amidst scandal, the Riggs name was retired in 1995. Riggs housed two accounts for alleged 9/11 hijackers, illegally allowed Chile’s Pinochet to retain access to his fortune, and allowed unreported illegal withdrawals from Equatorial Guinea’s oil revenue accounts.

It appears that Shenon and Sabato are determined to act as the MSM’s new generation of Warren Commission defenders. While they are slightly more willing to accept governmental errors and oversights in investigations, and “truthful” enough to admit them, they still trumpet the final analysis that Oswald acted alone.

…and that is a cruel and shocking act against both truth and historicity.

Hello, everyone. We have been in the midst of a state-to-state move that has been nothing short of challenging. It's lasted longer than we'd … END_OF_DOCUMENT_TOKEN_TO_BE_REPLACED

This is the 2018 Midnight Writer News Show theme song. There will be new clips in the 2019 version. Stay tuned for more! Thank you for … END_OF_DOCUMENT_TOKEN_TO_BE_REPLACED

The JFK Historical Group will host its annual conference on April 5-7, 2019 in Olney, IL. at Olney Central College. Speakers, to date, include: … END_OF_DOCUMENT_TOKEN_TO_BE_REPLACED

Regarding the audio stopping at the 9:21 mark of MWN Episode 048 - RFK Must Die - The Assassination of Bobby Kennedy..... (NOTE: For those who … END_OF_DOCUMENT_TOKEN_TO_BE_REPLACED

The 2017 theme song from the Midnight Writer News Show is now available for download, as well as for your listening pleasure. The 2018 theme will … END_OF_DOCUMENT_TOKEN_TO_BE_REPLACED

In a recent interview, Henry Kissinger advised that the United States should not rush into defeating ISIS and similar groups since it could, … END_OF_DOCUMENT_TOKEN_TO_BE_REPLACED

When David Ray Griffin first released The New Pearl Harbor in 2004, it was the premiere book to ask, as its subtitle states, "disturbing … END_OF_DOCUMENT_TOKEN_TO_BE_REPLACED

Randy Benson's documentary The Searchers (2017) is an excellent look at the early researchers and research associated with the John F. Kennedy … END_OF_DOCUMENT_TOKEN_TO_BE_REPLACED