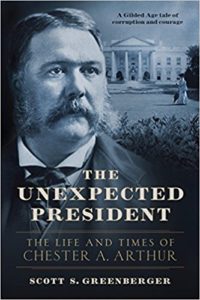 SCOTT GREENBERGER, author of The Unexpected President: The Life and Times of Chester A. Arthur, joins S.T. Patrick to discuss one of the most unlikely ascents to the presidency in American history. Greenberger answers questions about the nature of The Gilded Age, the Roscoe Conkling political machine in New York, an amazing legal case that will remind listeners of Rosa Parks nearly 100 years before, political hackdom, the fractured Republican conventions of 1880 and 1884, John A. Logan, the assassination of James Garfield, the rise and fall of political spoils, immigration debates that will ring eerily current,  and whether Greenberger feels the presidential performance surveys of historians have been air to Arthur. A relatively unknown part of U.S. history has now seen the light, thanks to Greenberger, so join us tonight on the Midnight Writer News Show.

Scott Greenberger is the author of The Unexpected President: The Life and Times of Chester A. Arthur. He is the coauthor, with former Senator Tom Daschle and Jeanne Lambrew, of the New York Times bestseller Critical: What We Can Do about the Health Care Crisis. Greenberger is currently the executive editor of Stateline, a news website funded by the Pew Charitable Trusts that covers state politics and policy for dozens of US newspapers. He was a newspaper reporter for twelve years, first at the Austin American-Statesman and then at the Boston Globe, and has also written for the New York Times, the Washington Post, GQ, Glamour, Washington Monthly, Moment magazine, and Washington City Paper. He lives in Takoma Park, Maryland.

This is the 2018 Midnight Writer News Show theme song. There will be new clips in the 2019 version. Stay tuned for more! Thank you for … END_OF_DOCUMENT_TOKEN_TO_BE_REPLACED

The JFK Historical Group will host its annual conference on April 5-7, 2019 in Olney, IL. at Olney Central College. Speakers, to date, include: … END_OF_DOCUMENT_TOKEN_TO_BE_REPLACED

Regarding the audio stopping at the 9:21 mark of MWN Episode 048 - RFK Must Die - The Assassination of Bobby Kennedy..... (NOTE: For those who … END_OF_DOCUMENT_TOKEN_TO_BE_REPLACED

The 2017 theme song from the Midnight Writer News Show is now available for download, as well as for your listening pleasure. The 2018 theme will … END_OF_DOCUMENT_TOKEN_TO_BE_REPLACED

In a recent interview, Henry Kissinger advised that the United States should not rush into defeating ISIS and similar groups since it could, … END_OF_DOCUMENT_TOKEN_TO_BE_REPLACED

When David Ray Griffin first released The New Pearl Harbor in 2004, it was the premiere book to ask, as its subtitle states, "disturbing … END_OF_DOCUMENT_TOKEN_TO_BE_REPLACED

Randy Benson's documentary The Searchers (2017) is an excellent look at the early researchers and research associated with the John F. Kennedy … END_OF_DOCUMENT_TOKEN_TO_BE_REPLACED