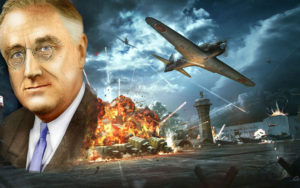 Douglas Horne, author of the two-volume Deception, Intrigue, and the Road to War, joins S.T. Patrick to discuss FDR’s foreknowledge of the Japanese attack on Pearl Harbor on December 7, 1941.

Doug opted for a major career shift when he relocated to Washington, D.C. in 1995 to assume a position on the staff of the President John F. Kennedy Assassination Records Review Board (ARRB); as head of the Military Records Team on the ARRB, Doug oversaw the release of significant historical documents related to U.S. policy on Cuba and Vietnam during the Kennedy years, and he was the principal research assistant for the ARRB General Counsel during the Review Board’s crucial depositions of ten (10) key JFK autopsy witnesses.

Mr. Horne retired from Federal Service in 2016, after working at the U.S. Holocaust Memorial Museum for 2 years, and after completing his civil service career by working with the U.S. State Department’s passport division for the final 14 years of his 40-year Federal career.

Doug is the author of three books:

(1) The five-volume Inside the Assassination Records Review Board, about the U.S. government’s cover-up of the medical evidence in the JFK assassination;

(2) The e-book JFK’s War with the National Security Establishment: Why Kennedy was Assassinated; and

(3) His most recent work, Deception, Intrigue, and the Road to War, about FDR and Pearl Harbor, was published this year.
Douglas Horne can be read at Inside the ARRB on Live Journal.
This is episode 007 of the Midnight Writer News Show with S.T. Patrick.
Please follow and like us:

This is the 2018 Midnight Writer News Show theme song. There will be new clips in the 2019 version. Stay tuned for more! Thank you for … END_OF_DOCUMENT_TOKEN_TO_BE_REPLACED

The JFK Historical Group will host its annual conference on April 5-7, 2019 in Olney, IL. at Olney Central College. Speakers, to date, include: … END_OF_DOCUMENT_TOKEN_TO_BE_REPLACED

Regarding the audio stopping at the 9:21 mark of MWN Episode 048 - RFK Must Die - The Assassination of Bobby Kennedy..... (NOTE: For those who … END_OF_DOCUMENT_TOKEN_TO_BE_REPLACED

The 2017 theme song from the Midnight Writer News Show is now available for download, as well as for your listening pleasure. The 2018 theme will … END_OF_DOCUMENT_TOKEN_TO_BE_REPLACED

In a recent interview, Henry Kissinger advised that the United States should not rush into defeating ISIS and similar groups since it could, … END_OF_DOCUMENT_TOKEN_TO_BE_REPLACED

When David Ray Griffin first released The New Pearl Harbor in 2004, it was the premiere book to ask, as its subtitle states, "disturbing … END_OF_DOCUMENT_TOKEN_TO_BE_REPLACED

Randy Benson's documentary The Searchers (2017) is an excellent look at the early researchers and research associated with the John F. Kennedy … END_OF_DOCUMENT_TOKEN_TO_BE_REPLACED