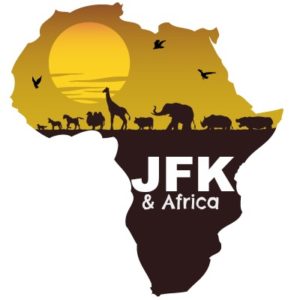 While President John F. Kennedy’s foreign policy initiatives in Southeast Asia, Cuba, or Moscow get more attention, it was his African policy (along with the widely written-about Alliance for Progress in Latin America) that best exemplified the heart of Kennedy’s international aspirations. It was also a microcosm clearly illuminating his ongoing confrontation with the National Security State (i.e. the Military-Industrial Complex that President Eisenhower had warned about in his farewell address).

Kennedy faced extensive opposition to his attempts at aiding nationalized industries and nations that had, in exchange for compensation, expropriated American-owned corporations. In many instances, these corporations controlled a nation’s raw materials and were its last, best hope at economic independence.. These were not only African nations. Kennedy’s pro-sovereignty business ideology extended from Latin America’s Alliance for Progress to India’s Bokoro Steel Mill to Africa (Ghana’s Volta Dam project).

Congressional contention and bewilderment regarding a Kennedy foreign policy that refused to draw a proverbial line in the sand regarding Cold War alliances grew even more heated when the president pushed to aid countries that had also sought economic alliances with the Soviet Union. Many potential partners were even adamantly anti-Western in their policies as well as their verbiage.

Kennedy was decidedly pro-sovereignty, and stated just that. He did not tie aid to mutual agreement nor was it tied to mutual goals and aims. “Our view of the world crisis is that countries are entitled to national sovereignty and independence,” Kennedy said. “That is all we ever suggested. That is the purpose of our aid… That is a different matter from suggesting that, in order to be entitled to our assistance… they must agree with us, because quite obviously these people in the underdeveloped world are newly independent, they want to run their own affairs, they would rather not accept assistance if we have that kind of string attached to it.”

Kennedy understood the needs of young, free nations without feeling the predatory desire to harness burgeoning nations and populations with loans, agreements, and exploitative treaties that cripple countries for generations.

Kennedy never verbally untangled Woodrow Wilson’s lofty goal of a “world safe for democracy,” but he did – beginning in 1963 – start referring in speeches to “a world made safe for diversity.” This was not the over-regulated and pretentiously-demanded “diversity” of 21st century college campuses and mainstream mass media hero-making. This was a diversity for one nation to control its own destiny without burdensome dictates from Washington D.C., London, Paris, or even Moscow or Beijing.

He disagreed with John Foster Dulles’ characterization of Neutralism as “immoral.” Kennedy saw neutralism as “inevitable.” It was not his intention to immediately tattoo either an American flag or a Russian sickle on every country. As he had stated in his inaugural address, it was more important to support their fight for freedom than demand a loyalty to global Americanization.

Kennedy’s approach was not without purely altruistic and without some level of geopolitical strategy. The Soviet Union had long courted neutrals, and had done so quite successfully. Kennedy, a sportsman and an ex-soldier himself, reveled in the spirit of competition. He also believed that some extension of the olive branch would allow him some influence on these recently impenetrable leaders, administrations, and countries.

Whatever opposition Kennedy felt was not just domestic. His European allies had previously engaged in a policy whereby all African aid applications were reviewed by their former colonial masters. While this parental policy was acceptable to the Eisenhower and Dulles team, the Kennedy administration found it unacceptable.

Mennen Williams, two-time Michigan governor and Kennedy’s Assistant Secretary of State for African Affairs, endorsed the “Africa for Africans” slogan and further enraged the Euro-colonialists still stinging from their African losses. Kennedy wittily commented, “I don’t know who else Africa should be for.” In 1969, Mennen wrote a book on the emergence of modern Africa, Africa for the Africans.

Kennedy’s administration was not unconcerned with a nation’s domestic policies. He believed wholeheartedly that funds coming from the taxpayers of the United States should be used wisely, and he pushed for that to be so. However, he also knew that the American system – much to the posthumous dismay of Henry Clay and the Whig Party – could not be universally or unilaterally imposed on nations that “are not white… are not Christians… [and] knew nothing about free enterprise or due process of law or the Australian ballot.”

Next: Part Two of JFK and Africa: Safe for Diversity will focus on country-specific case studies of the Kennedy foreign policy in Africa.

Hello, everyone. We have been in the midst of a state-to-state move that has been nothing short of challenging. It's lasted longer than we'd … END_OF_DOCUMENT_TOKEN_TO_BE_REPLACED

This is the 2018 Midnight Writer News Show theme song. There will be new clips in the 2019 version. Stay tuned for more! Thank you for … END_OF_DOCUMENT_TOKEN_TO_BE_REPLACED

The JFK Historical Group will host its annual conference on April 5-7, 2019 in Olney, IL. at Olney Central College. Speakers, to date, include: … END_OF_DOCUMENT_TOKEN_TO_BE_REPLACED

Regarding the audio stopping at the 9:21 mark of MWN Episode 048 - RFK Must Die - The Assassination of Bobby Kennedy..... (NOTE: For those who … END_OF_DOCUMENT_TOKEN_TO_BE_REPLACED

The 2017 theme song from the Midnight Writer News Show is now available for download, as well as for your listening pleasure. The 2018 theme will … END_OF_DOCUMENT_TOKEN_TO_BE_REPLACED

In a recent interview, Henry Kissinger advised that the United States should not rush into defeating ISIS and similar groups since it could, … END_OF_DOCUMENT_TOKEN_TO_BE_REPLACED

When David Ray Griffin first released The New Pearl Harbor in 2004, it was the premiere book to ask, as its subtitle states, "disturbing … END_OF_DOCUMENT_TOKEN_TO_BE_REPLACED

Randy Benson's documentary The Searchers (2017) is an excellent look at the early researchers and research associated with the John F. Kennedy … END_OF_DOCUMENT_TOKEN_TO_BE_REPLACED