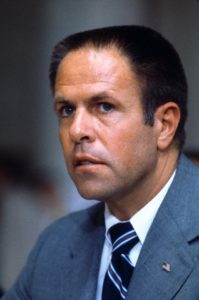 H.R. “Bob” Haldeman was best known as Richard Nixon’s Chief of Staff and one of the key figures in historical Watergate investigations. While Haldeman could be described as having been steely, his post-administration work has been among the most open and interesting to have come from a Nixon aide.

Haldeman had suggested an investigation of the Kennedy assassination when he entered the White House under Nixon. Intrigued by the competing theories on the assassination, and writing with Joseph DiMona in their book The Ends of Power, Haldeman said that he felt as if he would be in a position to get all the facts. The president nixed the potential investigation.

No mention of a (CIA-planned) Castro assassination attempt was revealed to the Warren Commission. CIA Counterintelligence Chief James Jesus Angleton had called the FBI’s William Sullivan to rehearse the questions and answers they would give to Chief Justice Earl Warren’s commission investigating the Kennedy assassination.

It was important to the CIA that the FBI agreed that Oswald had no ties to the CIA and therefore no reason to suspect a conspiracy. A conspiracy would need conspirators and the CIA was not in the business of being linked to the Kennedy assassination or the Watergate cover-up. Until the Church Commission later exposed multitudes of CIA black ops that had been underway for decades, the CIA had portrayed itself as the bastion of truth, justice, and the American way.

The CIA had called Sullivan who, coincidentally, was Nixon’s highest-ranking friend at the FBI. Prior to the Watergate scandal, it was Sullivan who, unbeknownst to FBI Director J. Edgar Hoover, took the 1969 FBI wiretap transcripts that Nixon had ordered and delivered them to Robert Mardian for safekeeping. Mardian was a close friend of Nixon Attorney General John Mitchell.

Haldeman theorized that Nixon learned about then-CIA Director Richard Helms’ cover up with the Warren Commission from Sullivan. The cover up may have had a key supporter in Allen Dulles, the former CIA chief who had been fired by Kennedy after the Bay of Pigs disaster. Though he was fired by Kennedy, President Lyndon Johnson saw it fitting and responsible to name Dulles to the Warren Commission.

Nixon had famously told Helms that “It’s likely to blow the whole Bay of Pigs,” a line which Haldeman believed was a blunt reminder to Helms of the CIA cover up regarding the attempts on Castro’s life. Haldeman also believed these attempts triggered Castro’s involvement in the Kennedy assassination.

In one of the most interesting lines Haldeman ever spoke or wrote, he stated that, “It seems that in all of those Nixon references to the Bay of Pigs, he was actually referring to the Kennedy assassination.”

If one of Nixon’s most trusted aides suspected conspiracy in the murder of John F, Kennedy, it is not unreasonable to believe that Nixon himself had engaged in similar discussions with Haldeman.

Whether Haldeman was off base on the Cuban government’s involvement or not, the idea remains that he had questions as to the legitimacy of the official story of Kennedy’s murder as handed down by the Warren Commission. He was not the only key government official to suspect Cuban involvement. Nor would he be the only Nixon aide to suspect conspiracy.

Hello, everyone. We have been in the midst of a state-to-state move that has been nothing short of challenging. It's lasted longer than we'd … END_OF_DOCUMENT_TOKEN_TO_BE_REPLACED

This is the 2018 Midnight Writer News Show theme song. There will be new clips in the 2019 version. Stay tuned for more! Thank you for … END_OF_DOCUMENT_TOKEN_TO_BE_REPLACED

The JFK Historical Group will host its annual conference on April 5-7, 2019 in Olney, IL. at Olney Central College. Speakers, to date, include: … END_OF_DOCUMENT_TOKEN_TO_BE_REPLACED

Regarding the audio stopping at the 9:21 mark of MWN Episode 048 - RFK Must Die - The Assassination of Bobby Kennedy..... (NOTE: For those who … END_OF_DOCUMENT_TOKEN_TO_BE_REPLACED

The 2017 theme song from the Midnight Writer News Show is now available for download, as well as for your listening pleasure. The 2018 theme will … END_OF_DOCUMENT_TOKEN_TO_BE_REPLACED

In a recent interview, Henry Kissinger advised that the United States should not rush into defeating ISIS and similar groups since it could, … END_OF_DOCUMENT_TOKEN_TO_BE_REPLACED

When David Ray Griffin first released The New Pearl Harbor in 2004, it was the premiere book to ask, as its subtitle states, "disturbing … END_OF_DOCUMENT_TOKEN_TO_BE_REPLACED

Randy Benson's documentary The Searchers (2017) is an excellent look at the early researchers and research associated with the John F. Kennedy … END_OF_DOCUMENT_TOKEN_TO_BE_REPLACED