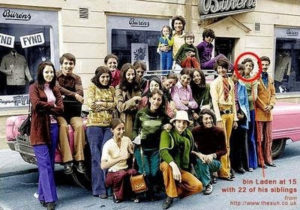 Within hours of the events of September 11, 2001, American skies were as clear as they had been a century before when flight was but yet a dream.  American politicians, dignitaries, families, athletes, and travelers were stranded worldwide. No one had been approved to fly – no one, except 140 Saudis located across the United States.

The Saudis consisted of two globally important families. The House of Saud, the Arabian oil dynasty, was the wealthiest family in the world. Their U.S. representative, Prince Bandar bin Sultan bin Abdul Aziz, was the Saudi Ambassador to the United States. The second family was startled by its own familial notoriety in those 48 hours. They were the bin Ladens, the billionaire construction (SBG, Saudi Binladen Group) family also based in Saudi Arabia. Their relative, Osama bin Laden, was already under immense fire across televisions worldwide as the perpetrator, organizer and mastermind of what would be called 9/11.

Bandar repeatedly contested the labeling of Osama as a Saudi. He was not a Saudi, Bandar claimed, since the House of Saud had taken away his passport due to his involvement in international terrorism.

Bandar defended the bin laden family to CNN on the October 1, 2001 edition of Larry King Live. Bandar described the family as “lovely human beings.” He touted their education, business acumen, and charitable activities to an America searching for answers.

The SBG was not intimate only with the House of Saud. They were also close to an American political dynasty in the making, the Bushes. In the mid-nineties, the Saudi Binladens joined the House of Saud, former secretary of state James Baker, and former president George H.W. Bush in investing and controlling the Carlyle Group, a private equity firm based in Washington D.C. The connections between Riyadh and D.C., between the Qasr Al Hukm and the White House, contracted as the world approached the new millennium.

Bin Ladens and Saudi Royals in the USA

Many of the bin Ladens residing in America lived in or around Boston. They had attended Harvard Law, Tufts, and Wheelock. Others lived in New York City and Orlando. One brother of Osama’s, frightened, called the Saudi embassy seeking aid and protection. He was temporarily sheltered at the Watergate Hotel, where he was instructed not to open the door.

A hotline was set up at the Saudi embassy almost immediately after the attacks. Saudi nationals inside the U.S. had a place to contact for information. For 48 hours, Bandar stayed in almost constant contact with National Security Adviser Condoleezza Rice and Secretary of State Colin Powell.

On September 13th, former Tampa police officer Dan Grossi received a call from the TPD. Former and retired officers often received calls for special security assignments. Grossi was asked if he would accompany a group of Saudi students en route to Lexington, Kentucky from Tampa. Grossi, knowing all planes had been grounded, doubted the possibility that the chartered plane would ever leave Tampa. Grossi asked former FBI agent Manuel Perez to assist. Perez accepted, yet also doubted whether or not the flight would happen.

Within minutes of the 9/11 attacks, the Federal Aviation Administration (FAA) had sent a notice to all airports. All airborne planes had to land at the nearest airport, while planes preparing to take off were grounded until further notice. On September 13th, there had been no further notice given by the FAA.

As Grossi and Perez waited, three Saudi men in their 20’s arrived for their flight. Grossi later told the Tampa Tribune that he was told any private plane departures would need White House approval. “One of them told me his father or his uncle was good friends with George Bush senior,” Grossi said.

The question of approval has yet to be answered. According to the FAA, the flight did not take place. It was never logged. The White House also said later that flights to evacuate Saudis did not occur.

Almost two hours later, Grossi escorted the Saudis off the plane in Lexington, where another American security officer assisted the men with their luggage and their route to a 747 with Arabic writing on the fuselage. The plane was equipped to take them back to Saudi Arabia, a flight neither the FAA nor the Bush White House said happened.

At least seven other similar flights took place all over America. The FBI denied having any role in the facilitation of the flights. However, Bandar told CNN that “with coordination with the FBI, we got them all out.”

It was later reported that FBI and Bandar’s charge d’affaires at the Saudi embassy were embroiled in contentious conversations about the planes leaving the country without properly identifying all of the passengers. Bandar favored the planes taking off as soon as the Saudis had boarded.  The FBI eventually identified all of the passengers, yet they were prohibited against launching any investigations.

Five more bin Laden family members left Boston again on September 18. They left Boston’s Logan Airport at a time when Logan was experiencing its height of chaos and confusion. Two of the alleged hijacked airliners had left Logan Airport on the morning of September 11.

When officials called Logan Airport on the morning of September 19 to arrange/approve another flight of bin Ladens, Tom Kinton, the director of aviation at Logan Airport, was confused. “We were in the midst of the worst terrorist act in history,” Kinton said. “And here we were seeing an evacuation of the bin Ladens!”

Virginia Buckingham, head of the Massachusetts Port Authority, was equally confused. “My staff was told that a private jet was arriving at Logan from Saudi Arabia to pick up fourteen members of Osama bin Laden’s family living in the Boston area,” Buckingham later wrote in the Boston Globe. “Does the FBI know? Does the State Department know? Why are they letting these people go? Have they questioned them?”

The FBI’s counterterrorism unit was absent from Boston as the Saudi planes landed at Logan Airport. A major PR campaign – Saudi funded – was underway to mend the image of the bin Laden family, who reflexively stated that they had denounced Osama well before September 11. Yet, does it seem plausible that every member of the bin Laden family had equally dismissed Osama from the family? Does it seem possible that no one in the family had spoken to him and had no information that could have been useful?

Whether or not the bin Ladens had the legal right to leave the United States (the FBI claims they did), it seems that the approvals came directly from the White House. Yet, if the White House believed that Osama bin Laden was Public Enemy #1, why allow his closest family members to escape U.S. investigation and U.S. law without even having been questioned?

At best, it seems negligent on the part of the White House. At worst, it appears as if the Bush administration was protecting its most profitable global allies by allowing members of their families to escape any kind of investigation in the United States.

Hello, everyone. We have been in the midst of a state-to-state move that has been nothing short of challenging. It's lasted longer than we'd … END_OF_DOCUMENT_TOKEN_TO_BE_REPLACED

This is the 2018 Midnight Writer News Show theme song. There will be new clips in the 2019 version. Stay tuned for more! Thank you for … END_OF_DOCUMENT_TOKEN_TO_BE_REPLACED

The JFK Historical Group will host its annual conference on April 5-7, 2019 in Olney, IL. at Olney Central College. Speakers, to date, include: … END_OF_DOCUMENT_TOKEN_TO_BE_REPLACED

Regarding the audio stopping at the 9:21 mark of MWN Episode 048 - RFK Must Die - The Assassination of Bobby Kennedy..... (NOTE: For those who … END_OF_DOCUMENT_TOKEN_TO_BE_REPLACED

The 2017 theme song from the Midnight Writer News Show is now available for download, as well as for your listening pleasure. The 2018 theme will … END_OF_DOCUMENT_TOKEN_TO_BE_REPLACED

In a recent interview, Henry Kissinger advised that the United States should not rush into defeating ISIS and similar groups since it could, … END_OF_DOCUMENT_TOKEN_TO_BE_REPLACED

When David Ray Griffin first released The New Pearl Harbor in 2004, it was the premiere book to ask, as its subtitle states, "disturbing … END_OF_DOCUMENT_TOKEN_TO_BE_REPLACED

Randy Benson's documentary The Searchers (2017) is an excellent look at the early researchers and research associated with the John F. Kennedy … END_OF_DOCUMENT_TOKEN_TO_BE_REPLACED