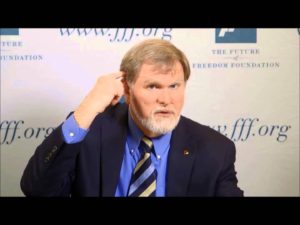 In an effort to counter Politico’s new spin on the JFK Records Act documents currently being released, researcher and author Douglas Horne has made his presentation from the September 2014 JFK Symposium in Washington D.C. available to the readers of Midnight Writer News.

Horne told Midnight Writer News that “[His] 2014 presentation proves that any trustworthy 21st century forensic analysis would admit that the medico-legal foundation for Oswald’s supposed “guilt” is so tainted and compromised that there could be no conclusion of his guilt at any trial today. If I am correct in this conclusion of mine, then the assertion made by Philip Shenon and Larry Sabato in their article on August 3, 2017 is indefensible, and demonstrably incorrect.”

Horne’s presentation, The JFK Medical Evidence: Inadmissible at Trial, is a pdf file that can be downloaded or viewed on the site.

Audio for slide # 75:  In these two audio excerpts, Walter Cronkite of CBS and Bob Clark of ABC both describe a car stop of JFK’s limousine in these audio clips taken from TV broadcasts the day of JFK’s assassination.  (Significance: there is no car stop seen in today’s version of the Zapruder film.)
Audio for slide # 87: This is an excerpt from researcher Peter Janney’s APR 2011 audio interview of Dino Brugioni while viewing frame 313 of the Zapruder film (the “head shot” frame).  Dino Brugioni was the Chief of Information at the CIA’s NPIC facility (National Photographic Interpretation Center) in 1963, and he examined the original Zapruder film the evening of Nov 23, 1963—the day after JFK’s assassination.  The head explosion he recalls examining in the out-of-camera original (unaltered) Zapruder film was much longer in duration, and went much higher in the air, than the so-called “head shot” in frame 313 of today’s Zapruder film.

Midnight Writer News would like to thank Douglas Horne for the use of his presentation.

This is the 2018 Midnight Writer News Show theme song. There will be new clips in the 2019 version. Stay tuned for more! Thank you for … END_OF_DOCUMENT_TOKEN_TO_BE_REPLACED

The JFK Historical Group will host its annual conference on April 5-7, 2019 in Olney, IL. at Olney Central College. Speakers, to date, include: … END_OF_DOCUMENT_TOKEN_TO_BE_REPLACED

Regarding the audio stopping at the 9:21 mark of MWN Episode 048 - RFK Must Die - The Assassination of Bobby Kennedy..... (NOTE: For those who … END_OF_DOCUMENT_TOKEN_TO_BE_REPLACED

The 2017 theme song from the Midnight Writer News Show is now available for download, as well as for your listening pleasure. The 2018 theme will … END_OF_DOCUMENT_TOKEN_TO_BE_REPLACED

In a recent interview, Henry Kissinger advised that the United States should not rush into defeating ISIS and similar groups since it could, … END_OF_DOCUMENT_TOKEN_TO_BE_REPLACED

When David Ray Griffin first released The New Pearl Harbor in 2004, it was the premiere book to ask, as its subtitle states, "disturbing … END_OF_DOCUMENT_TOKEN_TO_BE_REPLACED

Randy Benson's documentary The Searchers (2017) is an excellent look at the early researchers and research associated with the John F. Kennedy … END_OF_DOCUMENT_TOKEN_TO_BE_REPLACED