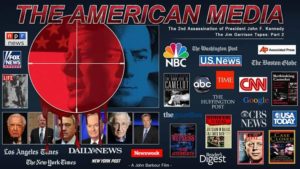 The headline is one of the few accurate descriptions in Michael Rechtshaffen’s March 25, 2017 LA Times review of John Barbour’s new documentary, The American Media & The Second Assassination of President John F. Kennedy. The headline says that the “title says it all.” Yes, the title absolutely does say it all. The documentary, part two of The Garrison Tapes, absolutely links the American media to a second, obviously metaphoric assassination of the nation’s 35th president.

Rechtshaffen then begins to paint with wide brushes over the two hour and ten minute film that he deems as “long-winded as its accusatory title.” What Rechtshaffen terms long-winded is what many will judge as being detailed. With the wealth of specific examples Barbour and co-producer Myra Bronstein had at their disposal, the documentary could have easily ran four hours and twenty minutes.

The proverbial cutting room floor could have been littered with hours of the History Channel’s Greatest Misses alone. Throw in the Discovery channel, the many Gerald Pozner appearances, the Gary Mack heel turn, and the stream of frothing anti-Stoneists appearing all over the media in 1991, and you would have a veritable Sgt. Pepper’s of LoneNutology albums.

The crumbling house of cards that is the Oswald-as-Lone-Nut theory has been in disrepair from the moment Dallas police officers stormed the Texas Theatre because – on a day when the president had been shot in their city – a complaint was called in that a man hadn’t properly paid to see Van Heflin’s thespianic skills on display.

Who would Rechtshaffen have to include if he were making a true list of so-called conspiracy theorists? A short list would also have to include those public figures who have either expressed publicly or privately (then later reported) their views. The CIA’s James Jesus Angleton and Chief Justice Earl Warren have, strategically or not, hinted toward Russian involvement. Ambassador to Mexico Thomas Mann, columnist Jack Anderson, and Johnny Roselli all questioned a possible Cuban influence. Lyndon Johnson at various points also questioned both Russia and Cuba (though many would say to hide his own foreknowledge). G. Robert Blakey, John H. Davis, and David Scheim have all fingered the mafia. Richard Nixon and H.R. Haldeman, as well as Bill Clinton and Webb Hubbell, questioned the Warren Commission’s findings. And from the Camelot era, may we include Ted Sorensen, Pierre Salinger and, yes, RFK?! Would they also be on Rechtshaffen’s list of conspiracy theorists in search of conspiracy porn?

Rechtshaffen’s thesis in this brief basting is that John Barbour is a man that has turned cranky (Rechtshaffen’s word) about his “own personal resentments” against the mainstream mass media. It is his theory that this is Barbour’s response to “networks that passed on the previous documentary.”

This could not be less true. If John Barbour has one media-centered axe to grind, it is not about what the media did to him. It instead concerns what the media – particularly Barbour’s own employer, NBC – did to his friend New Orleans District Attorney Jim Garrison, the one man who had the courage to file a case in the murder of President John F. Kennedy. The distasteful treatment of Garrison by NBC – detailed in the film – still affects Barbour today. It should be pointed out that the film’s harshest specific treatment of U.S. media figures is aimed at former anchors and hosts at CBS and FoxNews, not NBC.

The American Media & The Second Assassination of President John F. Kennedy is an important film. If justice is done, it will debunk the million-dollar corporate media debunkers and do for media complicity what the documentary Harlan County USA did for the working conditions of the blue-collar poor in the Midwest or what Upton Sinclair’s The Jungle did for meat packing industry.

In an era when we still discuss the insensitivity of an 18th century Chris Columbus, the horrors of 19th century slavery, and the religious intolerance of the centuries-old Inquisition and Crusades, should Rechtshaffen really be pained by the idea that John Barbour has a visceral negative reaction to those who still attempt to debunk truth regarding the only murder of a contemporary U.S. president? If this is Barbour’s cross to bear, them may we all help him bear it.

This is the 2018 Midnight Writer News Show theme song. There will be new clips in the 2019 version. Stay tuned for more! Thank you for … END_OF_DOCUMENT_TOKEN_TO_BE_REPLACED

The JFK Historical Group will host its annual conference on April 5-7, 2019 in Olney, IL. at Olney Central College. Speakers, to date, include: … END_OF_DOCUMENT_TOKEN_TO_BE_REPLACED

Regarding the audio stopping at the 9:21 mark of MWN Episode 048 - RFK Must Die - The Assassination of Bobby Kennedy..... (NOTE: For those who … END_OF_DOCUMENT_TOKEN_TO_BE_REPLACED

The 2017 theme song from the Midnight Writer News Show is now available for download, as well as for your listening pleasure. The 2018 theme will … END_OF_DOCUMENT_TOKEN_TO_BE_REPLACED

In a recent interview, Henry Kissinger advised that the United States should not rush into defeating ISIS and similar groups since it could, … END_OF_DOCUMENT_TOKEN_TO_BE_REPLACED

When David Ray Griffin first released The New Pearl Harbor in 2004, it was the premiere book to ask, as its subtitle states, "disturbing … END_OF_DOCUMENT_TOKEN_TO_BE_REPLACED

Randy Benson's documentary The Searchers (2017) is an excellent look at the early researchers and research associated with the John F. Kennedy … END_OF_DOCUMENT_TOKEN_TO_BE_REPLACED