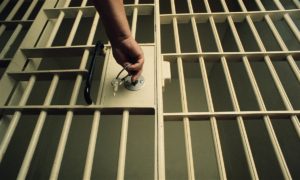 As Darren Rainey screamed, “Please take me out! I can’t take it anymore!,” prison guards under the watch of the notorious Florida Department of Corrections laughed. Darren Rainey was then burned to death by four corrections officers at Dade Correctional Institution outside of Miami, Florida on June 23, 2012.

In a bafflingly inhumane decision this week, Miami-Dade State’s Attorney Katherine Fernandez Rundle’s office announced that the four officers overseeing the gruesome death would not be charged with a crime. “The evidence,” Rundle’s office wrote, “does not show that Rainey’s well-being was grossly disregarded by the correctional staff.” Rundle ascended to the State’s Attorney position of Miami-Dade County when Janet Reno joined Bill Clinton’s administration as Attorney General.

The officers associated with grimly boiling Darren Rainey to death are John Fan, Cornelius Thompson, Ronald Clarke, and Edwina Williams. Rainey was a schizophrenic man who was serving time for cocaine possession.

Rainey was found in the shower floor, the spot of his cruel and unusual death. Nurses found burns that covered over 90 percent of his body. This was apparently not a one-time act. Journalist Julie E. Brown of the Miami Herald spoke to witnesses, inmates, and staff members who acknowledged that showers were routinely used to punish inmates who upset the prison guards who were armed with draconian torture tactics as retaliation. The revelation of that truth resulted in lawsuits, staff firings, changes in policy, and legislative hearings. Yet, despite the indirect acknowledgments of wrongdoing that followed the journalistic revelations, Rundle declined to allow a court to decide the guilt or innocence of the correctional officers.

Harriett Krzykowski, a whistleblower who attempted to speak out about the officer abuses at Miami-Dade Correctional Institution was, according to the New Yorker, harassed, bullied, and forced into therapy after speaking out.

The water that burned Rainey to death topped 180 degrees, hot enough to cook a pack of Ramen noodles (or a “soup,” in the prison vernacular). Inmates often cook their Ramen noodles in the shower areas known for their unbearably hot water. Former Dade inmates have affirmed the stories told by the former employees of Dade Correctional. Many tell stories of the pattern of abuse both in and outside of Dade’s TCU unit, the unit most responsible for the care of those who need immediate physical and mental attention.

As they laughed, the officers screamed “Is it hot enough?” to Rainey. Rainey’s body temperature was too high for nurses to register with a thermometer and charred skin fell from the bones as he was touched. Rundle’s report linked the skin falling from Rainey’s body with body decomposition. Rainey family members claim they were pressured to quickly cremate the body, thus ending any potential future independent autopsy.

Jerry Iannelli of the Miami New Times wrote that “the facts of the case are so inhumanely grotesque that the decision should haunt the office for eternity.”

Rainey’s death is torture and Florida corrections officers served as inquisitors and executioners. Inmates who testified with very similar stories were discounted by the Rundle’s office as “inconsistent” and unreliable. The inmates, however, are testifying to experiences they have either faced, heard, or seen. The motivation of officers is self-preservation. The inmates are believable and the corrections officers are not. These officers are the face of the Florida Department of Corrections, a face that is constantly blurred by the ragged lines of torture, degrading language, and group punishment that crosses over the line into human rights abuses.

The fldocjobs.com website that lists available openings in the Florida Department of Corrections lists a 457 Tax Deferred Retirement Plan, Supplemental Dental, and Paid Sick Leave as benefits of a career in corrections. The Rundle decision not to prosecute means that immunity from prosecution for blatant torture and human rights violations can now be added to the list.

What may be more disturbing – and yet unreported in many circles – are the rampant whispers regarding widespread gang affiliation ties between corrections officers, the Bloods, and the Latin Kings. When you next hear that gangs “run the prisons,” do not extend that influence only to inmates. Officers in institutions such as Dade Correctional are also heavily influenced by both their own personal gang affiliations and those within their immediate families. Let it not be forgotten that the officers are pulled from the same demographic pool as the inmates.

In a disturbing trend, inmate mortality numbers in the Florida Department of Corrections have been steadily rising since 2000.  Officers are responsible for the “care, custody, and control” of the 98,000+ inmates in its unstable department that has directors frustratedly leaving within a few years of taking the helm.

It is time for these abuses to end. Midnight Writer News calls for the humane treatment of those fathers, brothers, sons, mothers, sisters, and daughters caged in the Florida Department of Corrections. These are men and women who have been jailed – many for excessive amounts of time – and taken away from the families who care about them most. They are still human, they are still Americans, and they are still valuable. Breaking American laws does not equate to a loss of human rights in any situation. Being hired as a corrections officer does not allow a person to violate the human rights of another…. Darren Rainey, included.

Midnight Writer News has vowed to fight for those who have no defenders. This story will continue….

Hello, everyone. We have been in the midst of a state-to-state move that has been nothing short of challenging. It's lasted longer than we'd … END_OF_DOCUMENT_TOKEN_TO_BE_REPLACED

This is the 2018 Midnight Writer News Show theme song. There will be new clips in the 2019 version. Stay tuned for more! Thank you for … END_OF_DOCUMENT_TOKEN_TO_BE_REPLACED

The JFK Historical Group will host its annual conference on April 5-7, 2019 in Olney, IL. at Olney Central College. Speakers, to date, include: … END_OF_DOCUMENT_TOKEN_TO_BE_REPLACED

Regarding the audio stopping at the 9:21 mark of MWN Episode 048 - RFK Must Die - The Assassination of Bobby Kennedy..... (NOTE: For those who … END_OF_DOCUMENT_TOKEN_TO_BE_REPLACED

The 2017 theme song from the Midnight Writer News Show is now available for download, as well as for your listening pleasure. The 2018 theme will … END_OF_DOCUMENT_TOKEN_TO_BE_REPLACED

In a recent interview, Henry Kissinger advised that the United States should not rush into defeating ISIS and similar groups since it could, … END_OF_DOCUMENT_TOKEN_TO_BE_REPLACED

When David Ray Griffin first released The New Pearl Harbor in 2004, it was the premiere book to ask, as its subtitle states, "disturbing … END_OF_DOCUMENT_TOKEN_TO_BE_REPLACED

Randy Benson's documentary The Searchers (2017) is an excellent look at the early researchers and research associated with the John F. Kennedy … END_OF_DOCUMENT_TOKEN_TO_BE_REPLACED